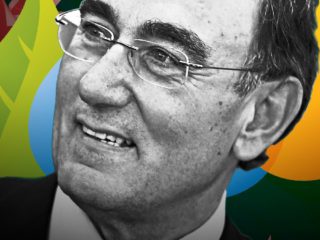 The Chairman of Iberdrola, Ignacio Sánchez Galán, has rejected the “unexpected charges” that the Government of Pedro Sánchez wants to apply on nuclear, hydraulic and wind installations prior to 2050 based on the “false” argument that they receive benefits from the sky and are already amortized. “It is not true,” said Galán, who has claimed “legal certainty and certainty” to invest in the energy sector.

Galán has criticized the draft law to correct the dividend received by non-emitting plants (hydro and nuclear and part of the wind) as consequence of CO2 costs in the emission rights market.

The Chairman of Iberdrola, where he has made it clear that these facilities in many cases are in losses and far from being amortized. To say otherwise is to be untrue. There are the accounts in the Mercantile Registry, “he indicated in his speech at the II International Economic Forum of ‘Expansion’.

“In short-term situations, structural decisions cannot be made”, said the executive, who nevertheless has shown his confidence in the commitment expressed by the fourth vice president and minister of Ecological Transition, Teresa RiberaFor throughout the parliamentary process and through dialogue, a solution is reached in line with the legal framework, which gives certainty to the investments to achieve the objectives set.

“On Iberdrola We are open to this dialogue in order to achieve a balanced, stable and incentive framework, to attract these investments, always taking into account social factors, and that does not make companies’ costs exorbitantly expensive ”, he stated. However, he explained that “we need clear planning, avoiding surprises and contradictions, and acting with dialogue and consensus, creating mechanisms to encourage those who comply.”

He has emphasized that in 20 years Iberdrola has put its social dividend into practice, in order to generate sustainable value for employees, shareholders and society, and that the pandemic, instead of making it retract positions, has led it to accelerate investments (10,000 million in 2020 and 17,000 million this year), to advance orders for 18 billion to suppliers, “removing the temptations to these firms to avail themselves of the temporary employment regulation files (ERTE)”, and to hire 6,000 more professionals, in addition to extending their presence in Sweden, Poland, the USA, Brazil, etc.

These investments are part of the company’s investment plan for 2030, with a total amount of 150,000 million, which is, according to Galán, “the largest plan of a company in Spain to make renewable generation and storage to achieve climate neutrality by 2030”, and which will contribute to adding 30,000 additional jobs to the 85,000 that now work directly for the group.

In addition, he recalled that the group has presented, together with other companies, 150 projects to the resilience plan that could mobilize 30,000 million and generate 60,000 jobs. “I trust that we will not miss this historic opportunity. We can transform our country », has underlined.

The nuclear sector has ensured that the power plants “Are not amortized”, with annual investments of around 300 million euros, and has underlined that the cut that the Government intends to provide to its remuneration, together with the current rates, taxes and fees, “increase the financial asphyxia of the nuclear park and lead it to their cessation of activity.

It’s a statement, Nuclear Forum, the employers of this industry, which expresses its perplexity at the declarations that the plants are amortized and that they enjoy ‘benefits that have fallen from the sky’, points out that these plants are currently in losses as a result of ‘a disproportionate, discriminatory and confiscatory taxation ».

In this sense, it recalls the audited balance sheets and profit and loss accounts of the companies that own the power plants, “known to the Ministry for the Ecological Transition and the Demographic Challenge”, with fixed assets pending amortization of more than 5.5 billion euros, with more than 3,000 million euros invested in the last ten years alone.

In this regard, it indicates that last year, as a result of low electricity prices, nuclear power plants had a negative cash flow of around 500 million euros and losses of more than € 1 billion. In addition, it estimates that investments of around 3,000 million euros will be necessary to maintain the units in optimal conditions of safety and reliability until their closure.

Thus, with the draft bill sent to the Congress of Deputies by the Government, it estimates that said negative cash flow would have increased significantly, as the price of carbon dioxide (CO2) emission rights had been at an average of 25 euros per ton.

In addition, it states that, since 2005, taken as a reference in the draft law, and until 2021, the taxes that support nuclear generation facilities have increased by about 20 euros per megawatt hour (MWh), representing 60% of its revenue in 2020.