GameStop and Other “Meme Stocks” Fall After Big Hikes 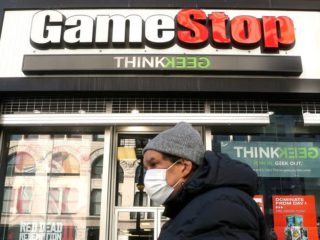 GameStop shares were recently trading at around $ 249, after the video game retailer reported stronger-than-expected earnings on Wednesday, named the former head of Amazon.com Inc.’s Australia business as its chief executive, and said that could sell new titles.

Skyrocketing shares in GameStop and AMC Entertainment Holdings over the past month have helped revitalize stocks, in a trading frenzy that began earlier this year and fueled large company moves popular with investors on forums like Reddit’s WallStreetBets. .

Many of those stocks were trading lower on Thursday. Shares of Clover Health Investments Corp. fell 11%, hamburger chain Wendy’s was down 4% and prison operator Geo Group Inc was down 18% after rising more than 38% on Wednesday. AMC shares were down about 11%.

The benchmark S&P 500 index has moved in a tight range in recent weeks and was up around 0.4% in midday trading.

(Reporting by Aaron Saldanha and Sagarika Jaisinghani in Bengaluru; additional information by Ira Iosebashvili. Edited in Spanish by Rodrigo Charme)