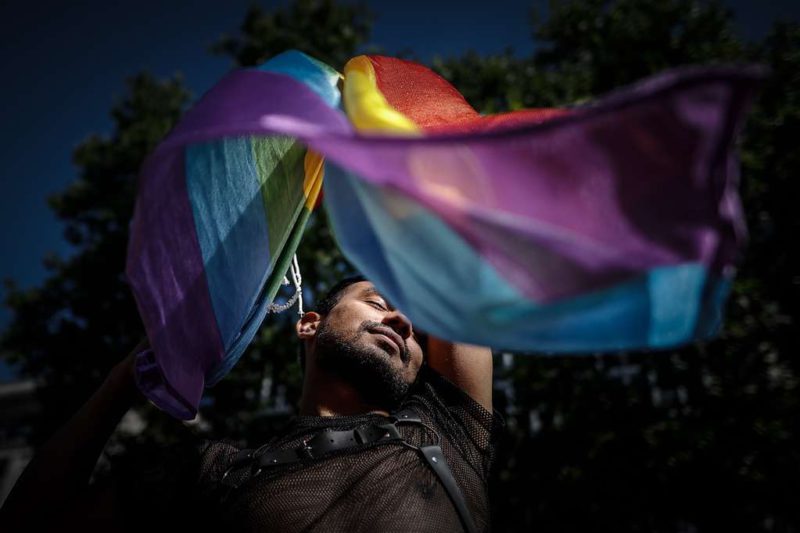 The news must be analyzed with the VAR. It is that yes, the president of the organizing committee of the next World Cup in Qatar 2022 He said that homosexuals will be welcome and that they will be able to feel safe. But he also said that public displays of affection are frowned upon. In other words, they will be welcomed only as long as they manage to go unnoticed.

FIFA’s interest in the matter is clear: it is nil. LGBTIQ + rights do not matter, neither the claims for oppression of women nor the number -exorbitant and clandestine- of workers killed in the construction of stadiums in the desert. Nor the complaints of bribery and corruption. The ball does not stain and show must go on.

Read also. Chile approved equal marriage and the militancy reminded Argentina: “Thanks to you who are the spearhead in Latin America”

The remarks stemmed from a tense interview that CNN journalist Amanda Davies made with Nasser Al-Khater, chairman of the committee. “You can be jailed for being homosexual in Qatar”she remarked after several minutes insisting on the freedom and safety of gay fans. “You can be jailed for being heterosexual in Qatar. I don’t understand the question, ”he retorted, visibly exasperated. Leveling down and that heterosexuals experience the same level of oppression as the LGTBIQ + collective is far from being a solution, but it seems to be the one that is offered to us by 2022.

“Modesty and discretion” is the request that Al-Khater makes on behalf of Qatar to its visitors. “What does it mean to be openly gay?” He asked the journalist. She then consulted what the limits of what was acceptable were, if they can be consulted anywhere. “People understand it innately,” he said and He stressed that same-sex marriage is not legal there, “as in most countries in the world.”

It has been law in Argentina since 2010. In the previous months, my friend Fernanda gave me an example of visibility that I still remember: “If you go to the supermarket with a man and ask him ‘my love, do we need coffee?’ nobody cares. But if I ask my girlfriend the same question and I also say ‘my love’ it is an act of militancy ”.

In early 2021, the organization Human Rights Watch presented a report on the situation of women in Qatar: the study of 27 official laws and regulations, interviews with fifty women and other inquiries led them to conclude that They do not enjoy full freedom given the extreme male guardianship to which they are subjected. They need authorization from a man to marry, work, study. This is for straight women, of course.

That a man celebrate a goal hugging his husband will be possible? What if a woman kisses another in the midst of sports euphoria? Will they reach the guarantees of safety and respect that the president of the committee gave to venture to participate in the sports party? Does FIFA even care? And the players? To the other fans? Will the sponsors say something?

“I am very afraid”

Al-Khater’s words were in response to the Australian Josh Cavallo, which a few weeks ago became the first openly gay soccer player. (Or do we believe that in all these years there has been no other that was silent?).

“I read something about Qatar applying the death penalty to gays, It is something that scares me and makes me not want to go. Knowing that the World Cup is in a country that puts our own life at risk terrifies me and makes me wonder if my life is more important than doing something really good in my professional career, ”said the player.

This year, the Tokyo Olympics had been a milestone, tripling the number of diverse athletes compared to the previous edition, held in Brazil. Tom Daley, a 27-year-old British swimmer and diver, celebrated his gold medal by saying: “I am proud to say that I am gay and also an Olympic champion.” He is married and the father of a three-year-old boy. “When I was younger I thought that I would never achieve anything because of who I was,” he told the cameras that registered his emotion. A visible emotion, although in Tokyo equal marriage is not legal either.

The World Cup has its own law

The World Cup fills us with expressions of national spirit, epic and sporting values, but it is first a millionaire business. And this will not be the first time that the cup has been played in a country with human rights violations. We know it well: Argentina had its World Cup in 1978 in the midst of the military dictatorship and the final was played next door to the clandestine detention center set up in the ESMA.

The tournament served as a smokescreen, but also approached international journalists who contacted human rights organizations locals who tried to find their relatives in the midst of terror. Desperation and cunning opened a path of denunciation that was important for some militants and a bitter memory for others.

In the last World Cup in Russia, it was precisely cleverness that led to demonstrations in favor of LGTBIQ + rights in a country where persecution is so marked that even the use of the multi-colored flag is prohibited.

And protest against it too: hours before the opening ceremony, British activist Peter Tatchell was arrested by Russian police for standing near Red Square with a sign that read “Vladimir Putin does not act against the torture of homosexuals in Chechnya”. Seriously, they arrested him for that.

Meanwhile, six people toured Russia wearing the jersey of their respective countries, as any fan would do in a World Cup. But they were not football fans -or yes- but activists from Spain, Holland, Brazil, Mexico, Argentina and Colombia. The shirts formed the flag of diversity in different iconic points, even in front of security forces, without being noticed. The project known as “Hidden in Plain Sight” was widely publicized on social media.

It’s hard to think that six activists have been braver than the countries, their soccer federations, the millionaire players and the brands that make their fortune in each World Cup, but it was so. The next World Cup will be in Qatar and the only thing that seems to be ahead is to protect the next breed of brave