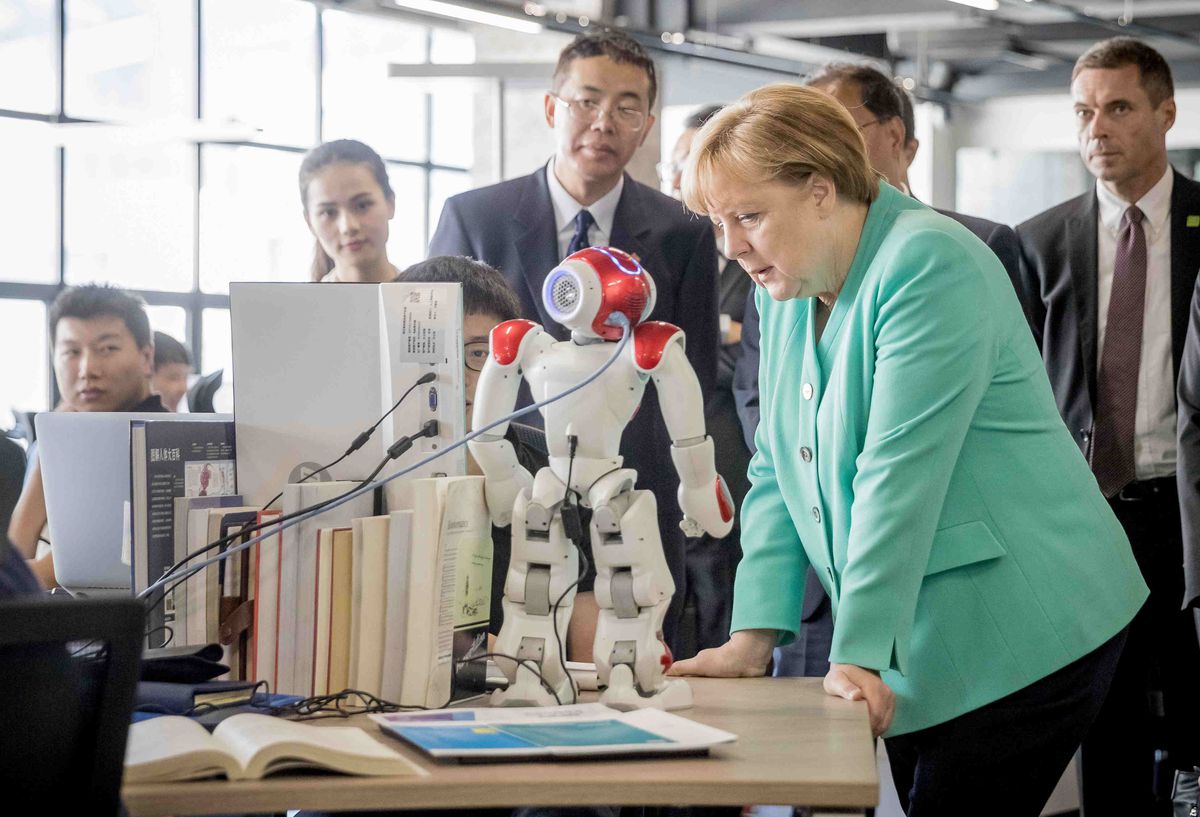 Germany: the country of faxes in need of modernization

The maddeningly slow internet connection in Mose, a town of 330 in Saxony-Anhalt, was what led Marco Röhrmann, its current mayor, to get into politics. That was seven years ago, but the situation has barely improved. A recent report on public television showed him standing on a ladder placing a small antenna on the front of his house. The antenna repeats the signal of a larger one, which in turn receives it from the next town. Broadband is neither available nor expected for the foreseeable future in rural Mose, but surprisingly not in the host cities of leading companies competing in a global market. In Germany, the first European economy, the internet is very slow. Literally and figuratively. And that is damaging companies, education and the public administration.

digitalization (digitization) is one of the words most repeated by the candidates to succeed Angela Merkel in the elections next Sunday. All of their programs promise investment and top priority. The task is colossal because the delay in Germany is enormous. The infrastructures fail to begin with. The country still has many millions of users navigating with copper lines. It is at the bottom of Europe in fiber optic penetration, which barely reaches 16% of homes and companies, when in Spain, for example, it exceeds 80%, according to a recent ranking by the FTTH Council Europe. For many experts, one of the greatest reproaches that can be made to the Chancellor is that of not having addressed digitization with greater will in her 16 years as Chancellor. Not having modernized the country while entrusting growth to industry and exports. Now his successor at the head of the Conservative Party, Armin Laschet, promises to create a ministry dedicated exclusively to lifting Germany out of its technological backwardness.

That the country has a lot to advance to catch up with other European partners is clear when doing paperwork with the Administration. Very few can be completed exclusively online; in general, physical presence or the sending of documentation by postal mail is required. The latest report from the European Commission on the advancement of the digital economy and society, known by the acronym DESI, places Germany in the last positions in digital administration, at the level of countries such as Bulgaria and Hungary. The backwardness is also evidenced in the still deeply rooted use of the fax, a popular technology in the seventies and eighties of the last century that in most developed countries has practically disappeared from the public and private sectors.

In January this year, the decision of the Bundestag, the lower house of the German Parliament, to stop using the fax machine for its ordinary communications made headlines. It has not happened yet: it was agreed to retire these devices in the next legislature, that is, the one that begins after the elections this Sunday. Also the federal government still depends on the fax. In a parliamentary response to a deputy from the Liberal Party (FDP) last October, the Executive revealed that it still used more than 900 of these devices. Especially in the Foreign Ministry, with 200. The answer explains that they are used to exchange classified information. Curiously, there are hardly any fax machines in the Chancellery, but it could be because the building where Angela Merkel has her office uses an even older, nineteenth-century method: pneumatic tubes of compressed air. In 2019, this physical paper transport system was used 2,400 times a month, according to another parliamentary response.

The pandemic has just opened the eyes of citizens about the timid German digitization. When schools had to close in March 2020, the deficiencies of the educational system became evident, unable to serve students remotely. Thousands of schools did not have a fast internet connection, many of them crashed their servers, others did not have distance learning platforms and the teachers were not technologically trained to teach lessons virtually. The president of the German Association of Teachers (DL), Heinz-Peter Meidinger, criticizes that over the months the regional authorities, those responsible for education, in general have not done much to improve distance learning either.

The arrival of the coronavirus also uncovered the deficits in data management in the health systems of the federal states. For months the local authorities were sending their records of infections and deaths by fax. Nor were the laboratories able to communicate quickly and electronically the results of diagnostic tests. The Ministry of Health had to approve an urgent package of 50 million euros to help digitize health services during 2020. Experts such as Katrin Suder, who chairs the committee created in 2017 to advise the Government on the digital transition, believe that the Decentralization, the distribution of powers among the 16 federal states, has delayed the modernization of the public sector. He thinks that in this matter Berlin should take the reins.

“For years there has been a lack of strategy and political will,” says Jeanette Hofmann, a researcher at the Berlin-based Alexander von Humboldt Institute for Internet and Society. In his opinion, it is urgent to get down to work and he believes that it will be the industry that will pressure politicians to act. “It cannot be that there are hyperspecialized companies that export all over the world, suffering because they cannot communicate in real time with their foreign clients,” he cites as an example of the loss of competitiveness caused by the delay in digitization. He agrees that the incompatible systems between the 16 Länder explain part of the problem, but he also attributes it to the strict data protection laws – which have made it impossible to create a digital health card, for example, or a data exchange system between the local police – and for historical reasons. Germany built its infrastructures before other countries and now it is very expensive to replace them. “Unfortunately, when it comes to digitization, we are not a rich country,” he concludes.

Although the problem affects almost the entire territory, rural areas have complained for years about the difficulty they find to surf the internet, send data or even watch streaming movies. Network capacity has barely improved in recent years. That is why a photographer, Klaus-Peter Kappest, decided at the end of last year to carry out an experiment to open the eyes of the authorities of his state, North Rhine-Westphalia, the most populous Land in Germany (18 million inhabitants) that he presides over. the conservative candidate for the election, Armin Laschet. The premise was simple: how will some photos get to my home printer sooner, if I send them online or if they are carried by a rider on horseback?

The photos were 4.5 gigabytes in size. He copied them onto a DVD and handed it to the rider, who had to travel the nearly 10 kilometers to his home in Schmallenberg-Oberkirchen in the Sauerland district, the constituency of another prominent conservative politician, Friedrich Merz. At the same time, he hit send on his laptop. An hour later, the horse had reached its destination and was back in the stable when the files had not even been uploaded to be shipped. Local media covered the feat.

The photographer wanted to draw attention to the role played by the country’s main telecommunications operator, Deutsche Telekom, which is still partly (around 40%) state-owned. “The authorities have allowed the company to choose where it wants to install fiber optics, which causes rural areas to be particularly affected because it only seeks high profitability,” says Jeanette Hofmann, a researcher at the Alexander von Humboldt Institute for Internet and Society. But the problem of internet speed affects the whole country. The few cities that have good coverage have achieved it thanks to local initiatives, explains Hofmann.

A recent ranking by the comparator Verivox concluded that while cities such as Cologne, Munich and Hamburg exceed 70% fiber optic coverage, others such as Frankfurt or Stuttgart do not reach 3%. Despite being the capital of the country, Berlin barely has 5% fiber optic penetration. The experts’ explanation is that very densely populated areas are usually well covered with cable or ADSL networks in which providers have been investing a lot of money. For many users, the speed they provide is sufficient and they have no incentive to invest in fiber optics. But with the expansion of the Internet of Things and the greater needs of companies, it is becoming more and more pressing to improve download speed, experts agree.