Getting enough water from air humidity for emergencies like earthquakes and tsunamis: what a device created by young Ecuadorians does 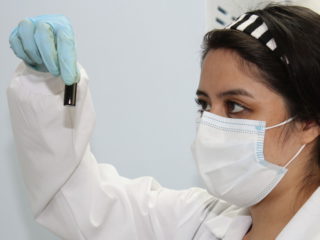 On April 16, 2016, there was a 7.8 magnitude earthquake off the coast of Ecuador, with its epicenter in the Pedernales canton of the Manabí province. This event left a balance of 673 deaths, destruction of infrastructure and a series of effects on the electrical systems and the supply of drinking water for the afflicted population.

This tragic event was the inspiration for a group of students from the Yachay Experimental Technology Research University of Ecuador, popularly known as Yachay Tech, to devise a device that helps to obtain water from air humidity in an efficient way. that serves to get going in situations like those of that earthquake.

His project is called ‘Water Y’ And its star product is a condenser with important innovations, which was created by a multidisciplinary group of students, made up of Doménica Garzón, Ariel Cabrera and Cynthia Arias, physics students; Cristina Rubio, from the chemistry area; and Carlos Chipantiza, from mathematics; who are accompanied by several volunteers such as Andersson Chagna, Santiago Chiriboga, Erick Ojeda, Ruth Villafuerte, involved in the part of alliances, marketing and finance.

“This has made the project viable […] Thanks to this diversity that we have in the group, from different careers, the project now already has a horizon, a north, and we have already been able to have quite favorable results, “says Chipantiza.

“What we did was develop a technology from a nanomaterial to increase the amount of water that condensers (products that are already on the market) can obtain from the humidity of the environment “, explains Garzón.

Specifically, Rubio details, the device has a design of a prism or a large rectangle, which is composed of condensation meshes, similar to those usually used in floriculture and other crops, which allow the passage of mist (fog ), which make the humidity of the air go from its gaseous state to its liquid state; It also has copper tubes, in which they deposit the nanomaterial, which is the innovation they bring to the condenser.

“This allows us to condense 600 times more than what was done without the nanomaterial”, highlights Rubio and adds that the result is “a cheaper, more accessible, effective and efficient condenser, thanks to these characteristics provided by the nanomaterial”.

This young woman also indicates that the condenser with the nanomaterial they have created provides “a reliable process”, where the water produced is suitable for use in different activities.

This highlights it as one more goodness of the device, by pointing out that “condensation is a natural purification process, that is to say that polluting particles are not going to condense” and, furthermore, they can “specifically select to be condensed to water thanks to certain thermodynamic and chemical criteria “.

For its optimal functioning, its creators say, the important thing is to have suitable temperature, humidity and pressure.

“Condensation works much better in places with high humidity, with a more island temperature, coastal, also in the Amazon and in places with fog,” says Rubio.

This device, from its conception, was made to be used in emergencies, such as an earthquake or tsunami, where access to water can become a critical point.

“Having an unlimited source at that time and also being portable is what could make a difference for people who manage to survive after a disaster like this,” says Garzón.

However, its creators have decided to direct it to other areas as well, such as agriculture. “We talked to experts and realized its great applicability to the agricultural sector,” says the young student and explains that the invention they have made allows the creation of condensers that adapt to the size of the crop, thus contributing to the difficult situation of many farmers. in the country.

Here comes another comparison with the devices that are already on the market. For example, says Garzón, “currently the condensers of one cubic meter produce approximately 220 liters of water; with innovation, this amount of water, with the same size, one cubic meter, can be increased to 500 liters in the best conditions” .

With the use of this device in agriculture they also seek to change the current irrigation culture. “What is happening right now, and big problems that large farms have, is that as irrigation is through irrigation canals, the water becomes contaminated, then it is dragged with chemicals and this ultimately affects the plants, the crops” , an issue that would end through the use of this condenser, just as the waste of the vital liquid would be avoided, as is currently the case in sowing, explains Chipantiza.

Another objective is bring the condenser with the nanomaterial to communities where access to water is difficult. “If you have a sector that is suffering from a shortage of water and you have the possibility of installing a reservoir for periods when it will not have this resource, because you can adapt the device so that it is filling this reservoir and have the liquid to these seasons, “says Cabrera.

They also consider that it is possible to use it to have another source of water in restaurants, in buildings and in parks.

Ultimately, it is a device that seeks savings in economic terms and space, but also that it is much more efficient “and that is precisely what makes it special,” says Cabrera.

Cabrera also points out that the condenser is just one part of Water Y, since these young people are also in charge of providing training and continuing education to create this new culture of obtaining and optimizing clean water for different uses.

This year, the project has been selected as a finalist in the global competition ‘Hult Prize’, the world’s largest social entrepreneurship competition, known as the “Nobel Prize for students,” says Rubio, “which seeks to create, develop and launch business ideas whose objective is to solve social problems that affect millions of people. Winners receive $ 1 million in seed capital to develop their idea, as well as help and advice from the international business community.