Home
World
Ghali despises Spain in his first words after passing the Covid: “Thanks to Algeria and Mauritania”

Ghali despises Spain in his first words after passing the Covid: “Thanks to Algeria and Mauritania” 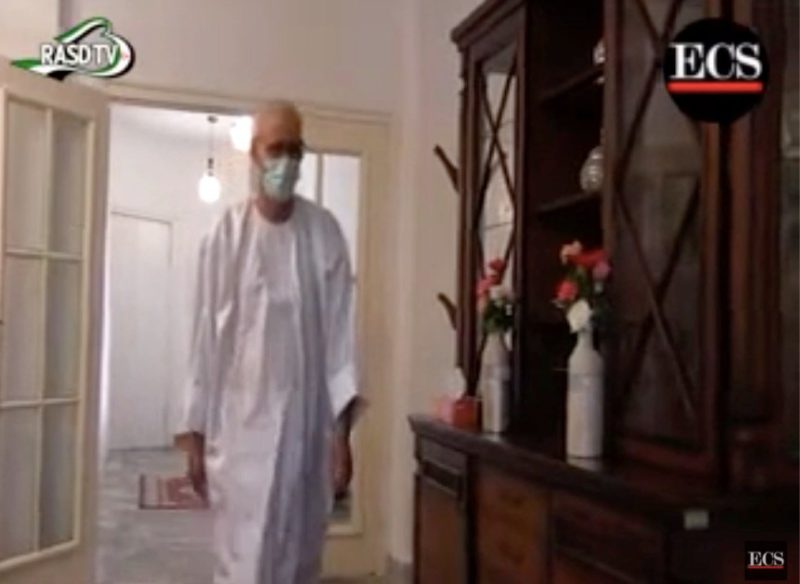 The leader of the Polisario Front, Brahim Ghali, reappears after overcoming the coronavirus. Break their silence. He does it to address his people and to celebrate Eid al-Adha, the feast of the lamb where in Islamic families an animal is sacrificed. The Saharawi leader has special mentions of gratitude to the countries of Algeria and of Mauritania. However, he does not have a word in favor of Spain where he ended up admitted and was saved from Covid-19.

It is an intervention by 16 minutes recorded in a very precarious way. He launches the video to show that he is physically and mentally fit enough to continue leading the self-styled Sahrawi Arab Democratic Republic. He appears walking through the apartment he occupies for now in Algeria to demonstrate his capabilities. He also stands up to listen to the Saharawi anthem.

«We express our warm and sincere congratulations on Eid al-Adha to our sister Algeria, to the people and their Government. (…) We also extend the sister Islamic Republic of Mauritania our most sincere congratulations and blessings, as we preserve for his people the highest signs of brotherhood and friendship “, says the Saharawi leader.

However, he does not remember at any time of Spain, which welcomed him into a hospital in Logroño that allowed him to recover. After learning that the Government had allowed this medical care to an enemy of Morocco, a terrible diplomatic crisis was unleashed that led to the massive arrival of hundreds of Moroccans to the Spanish coasts of irregular shape. The unrest in Ceuta and Melilla soared and generated tensions of the first order between our country’s relations with Morocco. Finally, the Minister of Foreign Affairs, Arancha González Laya, has been dismissed, in large part, for her management of this crisis.

In any case, Brahim Ghali forgets this matter. In its long speech he does not reserve a second for Spain. It should be remembered that his passage through La Rioja has opened several judicial fronts. The Court of Instruction number 7 of Zaragoza investigates the allegedly irregular entry into Spain of Brahim Ghali. Judge Rafael Lasala investigates the possible commission of a crime of documentary falsification and another of prevarication. On the other hand, in the National High Court Judge Santiago Pedraz investigates the complaints against him for crimes against humanity in Western Sahara.

Now, Ghali is sending generous compliments to Algeria and its president. «Ingrained principles, noble values ​​and firm positions of greater progress, well-being and prosperity that we ask the Almighty addressed to President Abdelmajid Tebboune – leader of Algeria. So that it achieves the aspirations of its people, in the construction of a strong and majestic Algeria, which is taking its leadership position in the region, on the African continent and on the international scene ”, this 71-year-old politician glossed.

On the other hand, on the occasion of the Eid al-Adha festival, Ghali greets and congratulates his people on his behalf and on behalf of the Saharawi Government. Offer positive words to «The fighters from the ranks of the Sahrawi Liberation Army and for the Sahrawis who live under occupation in the Sahrawi cities. Take advantage of denounce “Moroccan repression” questioning “the silence and inaction of the international community in the face of such crimes.”

They are his first words after five months of absence due to the contagion of Covid-19. The media related to the Polisario Front, ECSaharaui, remember that his last official act was February 25 on a visit to the President of Algeria. There he witnessed the military parades of February 28, on the anniversary of that republic.

He also speaks tangentially of the pandemic. Not to mention that he himself has passed the disease, he asks the Saharawis to respect the rules. “Eid al-Adha is also celebrated this year when the whole world is still dealing with the coronavirus pandemic. Despite continued efforts and numerous vaccines, it continues to pose a serious threat to human life. Unfortunately, this situation persists and has not stopped due to the continuation of the epidemic outbreaks. Like the rest, our people are concerned about this global challenge. It requires us today more than ever to strictly comply with all the procedures and measures prescribed by the competent authorities.

He ends his message with the slogans: «Strength, determination and will to impose independence and sovereignty. Happy Eid Al Adha, and may peace, mercy and blessings be with you.