Given the advance of the Delta variant and the new mutation of the Rio de Janeiro strain, the Government evaluates more controls at the borders 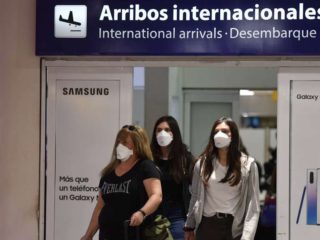 The income of three people from abroad infected with the Delta variant (originally identified as India) of coronavirus set off alarms in the Government. Although the dominant strain is Gamma (Manaus), more than 90% of cases correspond to some variant of concern and that is why it is being evaluated intensify controls or add restrictions at the borders.

The government needs delay the circulation of the Delta variant as long as possible while advancing with the vaccination campaign, mainly of second doses, and the only way to do it is by increasing controls or reducing the entry of people from abroad. While it is being analyzed, at the moment there are no definitions concrete in this regard, as he learned TN.com.ar.

Some projections show that if between four and eight people a day entered with the Delta variant, between the end of September and the beginning of October, Argentina would go through a third wave of coronavirus, a lot more devastating than the previous ones, due to the characteristics of this virus mutation.

In addition, the arrival of low temperatures that complicate outdoor activities is added. The Delta variant is the one of greatest concern for the havoc it caused in India and for what is happening in the United Kingdom, where there is already community circulation, despite the great progress in vaccination.

But a new mutation of the virus is added to the Delta in Rio de Janeiro, although for the moment It cannot be said that it is more lethal or transmissible than those that are already circulating in the world.

According to the latest SARS-COV-2 genomic surveillance report released by the Ministry of Health, from the analysis of 1077 samples in people without a history of travel to an international destination, it appears that throughout the country more than 90% correspond to variants of concern.

The one that predominates is Gamma with 41% and then the variant follows Lambda (Andina) with the 37% and the variant Alpha (British) with the 14%.

Furthermore, the distribution of variants differs according to the region of the country. In the region Center, Cuyo and South the priority ratio is superior to the rest of the regions. In the NOA and NEA region, the predominance of priority strains reaches between 40% and 50%.

In addition, between January and June 14, 248 samples from travelers who entered the country and who had positive results were performed genomic sequencing. According to the results obtained, in 89 cases (35.9% of the total) found the Gamma variant, in travelers who entered from Mexico, Brazil, Bolivia, Chile, Colombia and Paraguay.

In others 55 sequenced cases (22.2% of the total), the Alpha variant was isolated (UK). In that case, the travelers came from the United States, Mexico, Spain, Bangladesh, Panama and Paraguay.

Also, only one was registered with the variant Beta (South Africa) in a traveler from Spain. Meanwhile in three the Delta (India).

As for the variant Lambda (Andina), the Ministry of Health reported that it was detected in 15 people (the 6% of sequenced cases), while the 28% corresponded to variants that are not priority or of concern.