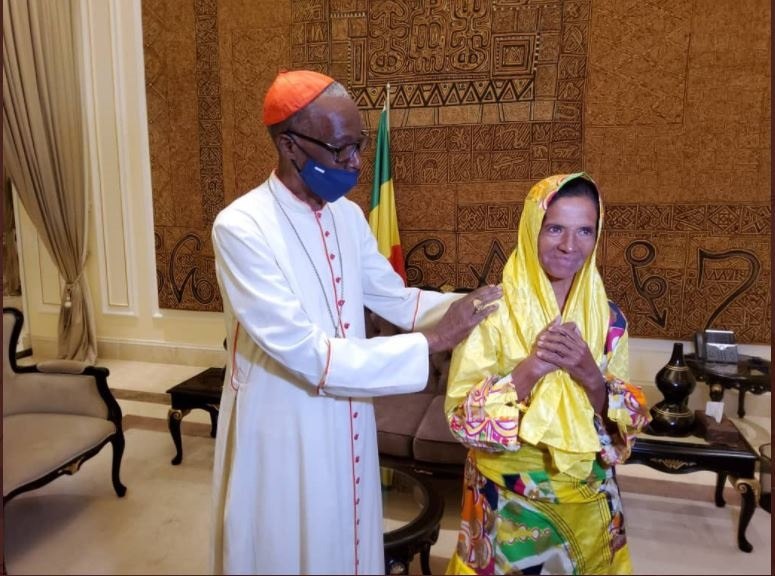 Gloria Narváez: The Colombian nun who survived four years and eight months of kidnapping by a jihadist group in Mali | International

Édgar Narváez dreamed of saying that phrase, so common among those kidnapped who regain freedom in Colombia, to his sister, the nun Gloria Narváez, kidnapped in Mali by a jihadist group linked to Al Qaeda.

After four years and eight months she was able to pronounce it in a short call between Pasto, in southern Colombia, and Rome, where the Colombian nun is now. The calls were a ritual in this Catholic family: every Thursday, before the kidnapping, the sister spoke by phone with her 84-year-old mother from the country where she was on mission. The lady passed away awaiting her return.

The news of his release, last October 9, was celebrated in Bogotá, in the Vatican and in the small parish of Karangasso, about 400 kilometers south of Bamako, where it all began. “When her captors arrested one of the nuns in the community, she came out and told them: I am the oldest, the one in charge. Let her go. Then the kidnappers released the nun and took Sister Gloria Cecilia Narváez away, ”said Noemí Quesada, leader of the Congregation of the Franciscan Sisters of María Inmaculada on that afternoon of February 7, 2017. For this reason, in many communities they stood out his heroic character and demanded his release.

Narváez, 59, had been working as a missionary since 2002 in Africa. She was first in Benin and in 2017 she moved to Karangasso to replace a nun for three months. “When you came to Colombia on vacation before going to Mali, we asked you not to leave. But she was clear that her vocation is to help those most in need, ”says her brother from Pasto.

That was the last time he saw her in person and then he has only been able to see her through the trials of her survival. There were a total of eight proofs of life: some published by the armed group and others obtained by a commission of the Colombian police. The most recent one dates back to July of this year, but it is a letter dated February that Édgar Narváez received through the International Committee of the Red Cross (ICRC). Handwritten and in capital letters, which told her brother that it was her, it said that she “hoped to regain freedom.”

Details of his release remain reserved, Colonel Gustavo Adolfo Camargo, deputy director of Anti-kidnapping and Anti-Extortion of the Colombian Police, tells MRT. However, he assures that the intelligence services of France, Spain and a commission of Colombian agents participated in the operation that had traveled to Mali in 2017 and had the objective of gathering information and sending messages that would keep the nun alive. The same was stated by the Malian Presidency in a statement: it is “the crowning of four years and eight months of joint efforts by various intelligence services.”

“We believe that having knowledge of first aid helped him stay alive by healing the group’s wounded and other hostages,” says Camargo. He was one of the agents who lived in Mali for seasons to make arrangements and locate the area of ​​captivity. “We knew that they were moving her from field to field in the Sahel desert. We tried to send messages to the group with people from the area to insist on their humanitarian work, because this terrorist group usually carries out economic kidnappings, “he added. Narváez was the only Colombian kidnapped abroad.

In August 2020, Mali experienced a coup and Colonel Assimi Goita became the de facto president of the country. Sister Gloria appeared with him on October 9. Camargo believes that the change of government in Mali favored the release of the nun, but avoids delving into how.

A few months later, the French humanitarian worker Sophie Pétronin was released, who shared captivity with Narváez and warned about her health. “Her spirit gives way, we must do everything possible to get her out of there,” he said at the time. Along with her, five other people were released, allegedly in exchange for the release of at least 200 suspected jihadists. At the same time, the Swiss evangelical missionary Beatrice Stockly, who was also kidnapped along with the Colombian nun, was murdered.

From Rome, where he met with Pope Francis, Narváez sent a message to the nuns of his congregation in Pasto. Visibly uncomfortable in a mask, she thanked them for their prayers. “I am very happy to have been in good health for five years, thank God,” said the nun.

In Pasto, her family says they see her thin but looking good. They know that she will spend at least one more month in Italy and then she will travel to Colombia, where they hope to convince her to return permanently.