Godfall will not stay on PS5 and PC, it will also come out on PS4 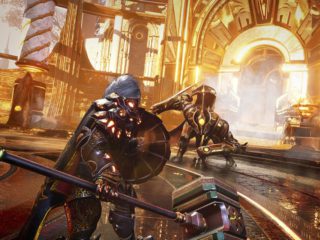 Gearbox Software and Counterplay Games have made it official: Godfall heads to PS4. This has been announced in the framework of E3 2021, where they have also detailed news about the only confirmed payment expansion, Fire and Darkness (Fire and Dark). Thus, both contents will be available on the same day, next August 10.

Those who purchase the PlayStation 4 version will have the opportunity to update for free at no additional cost, as well as play cooperatively regardless of the system they play on, since they will activate the option crossgen. In the expansion we will enter the Kingdom of Fire to kill countless enemies.

This action RPG still has more news on the horizon. Counterplay Games is also preparing a new free DLC, Lightbringer, in which we can enjoy both a new endgame mode as a cursed equipment, which has some requirements to unlock and use it. As if this were not enough, 40 new objects and more than 50 Valorplate skins will be added to provide more customization options. There will also be a matchmaking beta, which will give players the opportunity to group together through matchmaking for the first time. Below we offer you the official trailer, which you can see below these lines.

Filtered by PEGI on PS4

It is not the first and it will not be the last time that PEGI or other organizations that classify games by age slide a news related to video games not yet announced. That Godfall was going to come out on PS4 was something that was already suspected, since this European agency had made the file public before its time.

Godfall was not only the launch game for the PlayStation 5, but they also introduced it as the first new generation title for the console. Although the critics have not been especially kind, Counterplay Games continues with the title. It is also available on PC.