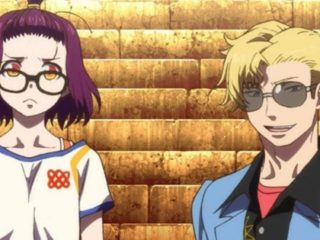 From this Monday until Friday, the Geeked Week, a space where Netflix has been communicating different news about its content. Among the announcements he gave today, there are new anime, as many films as series, that will arrive on the platform, some in the coming months and others that are still in production.

The anime has stomped on the platform since the premiere of Castlevania and other proposals such as Aggretsuko, so it has been betting very hard to attract more followers of the genre. So if you are a fan of anime, this selection may interest you a lot. Check here what are the contents that will be available in the service very soon.

+ All the anime coming to Netflix

The first ad was for the movie Mobile Suit Gundam Hathaway. Netflix released the first trailer, but has not yet given a release date.

On the other hand, he also released the preview of Shaman King, a reboot of the original series launched in 2001. It will have 52 episodes and can be seen on August 9 on Netflix in the United States. It was not confirmed if it is the same date for Latin America.

Likewise, an adaptation of the manga can be seen on the platform Edens Zero, written and illustrated by Hiro Mashima, which was published in 2018 and was a global bestseller. The series will arrive globally next August 26th.

Another series that will come to the platform very soon is Transformers: War for Cybertron trilogy, KINGDOM. It is perhaps one of the most anticipated of the year and will be available on Netflix USA on July 29.

On the other hand, they released the first glimpse of Exception, a space horror series based on a story by Hirotaka Adachi and that features the character design of Yoshitaka Amano, known for his work in the Final Fantasy.

Here’s your first glimpse at Exception.

The new space horror anime series is based on a new story by Hirotaka Adachi (aka “Otsuichi”), with character designs by Final Fantasy’s Yoshitaka Amano. #GeekedWeek pic.twitter.com/7CWhmNu9O6

Netflix will also have available a new anime movie called Make My Day. It is a science fiction proposal that seems very interesting. The synopsis tells that on an icy planet, a group of very strange creatures began to attack the inhabitants of the place and the objective will be to survive however it is.

On a cold planet of ice and snow, mysterious creatures suddenly have appeared from the dark underground and have begun to attack the inhabitants. Can humanity survive the terror lurking beyond the horizon? #GeekedWeek pic.twitter.com/lep9gLOexk

This film will be directed by Kyohei Ishiguro and it will follow the adventures of Izo and Raiden, who will try to take a young elf to a distant land of elves. It does not have a release date yet.

Izo, a Ronin, and Raiden, an orc, work to bring a young elf girl and the wand she carries to the land of the elves in the north.

Based on the Netflix movie, the anime film will be directed by Kyohei Ishiguro. #GeekedWeek pic.twitter.com/K03gZVMUie

Finally, Netflix announced that Godzilla: Singular Point this can be seen worldwide June 24 and with this announcement they also shared the trailer with English subtitles. The official synopsis for the series tells of a graduate student and an engineer mysteriously teaming up to fight an evil force that will endanger humanity.