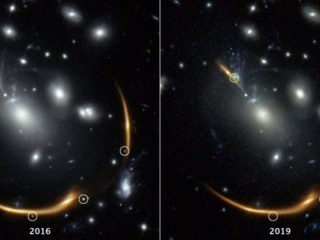 A supernova observed by the Hubble Space Telescope in 2016 will be seen again in 16 years. A group of astronomers determined this and found a particularly exciting example of a gravitational lens.

As the team now explains, they discovered the supernova on old Hubble images of the gigantic galaxy cluster MACS J0138.0-2155. The light from there therefore takes four billion years to reach us, but the immense gravity also bends light from objects behind it. Including the light of a supernova that took 10 billion years to reach us. It has already reached us in three ways, and it will arrive on a fourth in 16 years, the team predicts.

Light on the move in different ways

So-called gravitational lenses were already predicted in Albert Einstein’s general theory of relativity. Such massive objects bend light rays so that the objects that have emitted them appear to observers behind the gravitational lens in a different place than they actually are. The light rays travel different paths to the same destination, which is why they arrive at different times.

In the case of the now observed supernova compares research director Steve Rodney from the University of South Carolina with four trains leaving a station at the same time. They travel to the same destination on different routes, which means that they do not arrive at the same time. In contrast to the – incorrectly – predicted star explosion for 2022, this actually took place, the forecast for the new visibility is based only on the paths that the light travels.

As the team now explains, the 2019 supernova was discovered by Gabe Brammer from the University of Copenhagen on the Hubble image. First he discovered a point that could not be seen in later pictures, then two more. All three come from the same supernova, but due to the different paths that light has traveled, at different times after the star explosion. On the basis of further analyzes, especially of the mass in the galaxy cluster, which acts as a gravitational lens, the researchers were then able to calculate where the supernova 2037 (± 2 years) should reappear. A fifth appearance in 2042 will therefore not be bright enough to observe it.

When the supernova becomes detectable again around 2037, only the most powerful telescopes will be able to see it; it is far too faint for the naked eye. Until then, however, significantly more powerful observatories should not only be in use in space. By observing the fourth image, the researchers hope they will gain important insights into, for example, the speed at which the universe is spreading. That was why there had been growing controversy recently. The measurement of the time delay is a more direct way of determining the value of the so-called Hubble constant. It is a completely independent way. In addition, the observation could provide much more accurate maps of the distribution of dark matter. The analysis including the forecast is in the science magazine Nature Astronomy appeared.