Greetings from the past: New notebook with a not so new processor 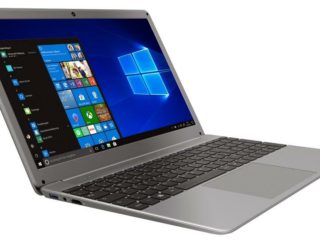 In the club newsletter last Saturday (June 12th), MediaMarkt advertised the Notebook Classic C150 (7S8512DV) from the MediaMarktSaturn house brand Peaq in the “New Items of the Month” category. A price or further details were not mentioned, so that the author of this line – a notebook tester at c’t – is of professional interest clicked the link: It is a 15.6-inch notebook and costs just under 630 euros with a Core i7 processor, 8 GB of RAM and a 512 GB SSD; Windows 10 Home is pre-installed.

So far, so inconspicuous – if you disregard the fact that bread-and-butter notebooks with similar key data were already available for around 500 euros before the corona pandemic. However, the Core i7 processor made suspicious in this context, because Core i3 or Core i5 CPUs are more common with such offers.

If you take a closer look at the technical data, you suddenly have to guess where the designation “Classic” in the name might come from: The processor is an old one Core i7-6560U. This comes from the sixth generation of Core i (code name Skylake), which celebrated its debut in late summer 2015 (!). Intel itself has not been shipping Skylake processors for a long time; The eleventh Core i generation aka Tiger Lake has been on the market since late summer 2020.

In the official device description – “Even more power for the device: the processor’s clock frequency is increased to up to 3.2 GHz thanks to the integrated Turbo Boost.” – there is no classification in this regard. The mentioned clock rate is correct, but also omits the fact that turbos beyond the 4 GHz mark are now common; Intel is even scratching the 5 GHz threshold.

What is even more dramatic is that the Core i7-6560U is, as was common back then, a dual core. However, quad-cores have been common in notebooks since the eighth Core i generation; and AMD has been selling its notebook processors with up to eight cores (Ryzen 4000) since the beginning of 2020 – and correspondingly more computing power. In concrete figures: A Skylake dual core achieves around 320 points in Cinebench R15 – the newer R20 and R23 were only released later. Current four-cores achieve 600 (Ryzen 3 4300U) to over 800 points (Core i7-1165G7) – and AMD’s eight-core, depending on the cooling, 1200 to 1500 points. The notebook is also available with a Core i7-7560U (seventh Core i generation, Kaby Lake) for 650 euros, but that doesn’t change the rough classification: This is also an outdated dual core.

The performance of a Skylake dual core is already achieved by small-core processors (formerly Atom) such as the Pentium Silver N6000 (freshly measured 316 points in Cinebench R15). This is also a quad-core, but it is satisfied with a maximum of 6 watts of waste heat, while the i7-6560U consumes 15 watts. The Pentium Silver N6000 can be found in the first notebooks such as the Acer Aspire 3 (A317-33) these days.

Another advantage: The brand new N6000 has a current integrated graphics unit, while the i7-6560U has remained at the 2015 level and, among other things, cannot play newer video codecs in higher bit rates without CPU load, which makes the fan noise. And the 3D performance wasn’t too great even then. The official product description at the sister shop Saturn, who also offers the Peaq Classic C150, by the way, has a completely different view: “The graphics card (Intel® Iris® Graphics 540) from Intel is useful for displaying images, videos or game sequences.“- an at least euphemistic statement.

Also the sentence “Working, surfing or gaming with a cinematic feeling: the screen impresses with an aspect ratio of 16: 9.“(Saturn) ignores reality – and not just because I hate to work in sticky cola armchairs while I am pelted with popcorn. 2), because they make work easier (less scrolling). With premium notebooks, one can even expect better formats for granted. In addition: cinema format is actually the even wider 2.35: 1 …

Incidentally, the product description mentions that the panel has stable viewing angles thanks to IPS technology (that’s a good thing!) And that there is no touchscreen, but says nothing about the surface quality. Older C150 models had matte screens, but the property cannot be transferred.

It is also unclear whether the RAM can be expanded. The data sheet says “Memory expansion: yes“, but the point is in a block, which curiously also contains information about the SSD. The text description”For optimized system stability, PEAQ has installed a DDR3 working memory. It gets by with a low operating voltage, which benefits the battery performance of the device.“(Saturn) sounds more like low-power RAM. Older C150 models specifically named the memory type LPDDR3; and such chips are basically soldered on.

The (not so) brave new world

Speaking of the older model: The Classic C150 (I38256DT) even only had a Core i3-5005U (fifth Core i generation, no Turbo Boost) and was equipped with 8 GB of RAM, a 256 SSD and Windows 10 Home in S mode . Before the pandemic, however, it came onto the market with an RRP of just 380 euros and is still (but no longer available) listed in the online shops of MediaMarkt and Saturn at the last street price called: 300 euros.

In these price regions, you may be able to overlook a low CPU performance and other age-related stumbling blocks. 630 euros for the current model clearly shows the effects not only of the increased demand caused by the pandemic, but also of the simultaneous shortage of chips and components as well as busy global logistics.

That does not mean that there is currently only scrap below 700 euros: The last Aldi notebook Medion Akoya E14304 (MD63780) had a modern quad-core processor, a matte 14-inch screen and otherwise decent equipment at an absolute competitive price from 430 euros. With the Peaq Classic C150 (7S8512DV) with a more than five year old processor for 200 euros more, the price-performance pendulum clearly swings in the opposite direction.

Notebooks with Intel’s current Tiger Lake generation are now available from 350 euros, albeit with entry-level equipment and often without a Windows license.