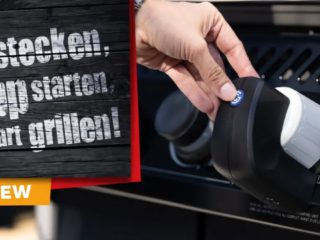 After the garden pump and lawn mower, grills with sensors, radio chips and servomotors can also be sniffed out in the smart garden. If the specialist dealer Grillfürst has its way, no one needs to buy a new outdoor fireplace for the smart home. The trading company has developed a smart control accessory that not only measures the temperature on compatible gas grills and reports it via app, but also regulates it by itself. Fans of persistent preparation methods no longer need to accompany the cooking process themselves. However, the limited model compatibility and the low radio range require a willingness to compromise.

The accessories, which cost 250 euros, will appear at the start of sales for 14 model series from the Napoleon, Weber and Broil King brands. Grillfürst’s own brand devices are to be added. Hardly any is available for less than 1,000 euros. The operating aid is therefore aimed at barbecue fans with a large budget, for whom more convenience is worth a lot of money.

To get started, grill fans put the control accessories on one of the available rotary knobs on the grill front. A matching adapter ensures that the Grill Control sits securely on the control element of the respective model. Users then place a temperature sensor in the cooking space, which they connect with a cable to a socket on the grill control handle. Both components stay in position with the help of magnetic holders.

This is followed by contact with the manufacturer’s app for Android 6.0 or newer and iOS 12 or newer via Bluetooth Low Energy. In the app, users specify the cooking time and temperature profile or select a preset that is suitable for the grill project with pre-set parameters. A built-in motor then automatically moves the rotary control to the required intensity at the intended time.

The wired thermometer automatically reports to the control accessories whether the desired temperature has been reached in the oven. A rechargeable battery integrated into the handle of the control unit provides energy and should provide an operating time of around 20 hours. It can then be recharged within three hours using a proprietary cable that connects to USB-A. A power supply unit is not included.

The smartphone must stay close to the grill

Grill fans can move away from the “dirty” gas grill during the cooking process, but they have to leave their smartphone nearby. This requires the short range of Bluetooth and the control concept. Grill Control needs a continuous radio connection to the app “for security reasons” in order to receive all the necessary control commands at the right time and to inform about the finished meal. If the Grill Control loses the Bluetooth connection for more than five minutes, it switches itself off according to the operating instructions. The cooking process would then be left to itself.

According to Grillfürst, the wireless controller supports Bluetooth Mesh, so that the range can be increased with the help of compatible devices from other manufacturers. However, Grilffürst does not provide any further information. Basically, however, the company plans to add interfaces for interaction with other smart technology. The app should be able to network with the cloud from next year.

Grill Control is available in the online shop and in Grillfürst shops. For a limited period of time, the smart device will cost 199 euros, 50 euros less than the regular price. The manufacturer has not yet announced the price for adapter kits with which the accessories can be adapted to one of the other compatible grill brand devices.