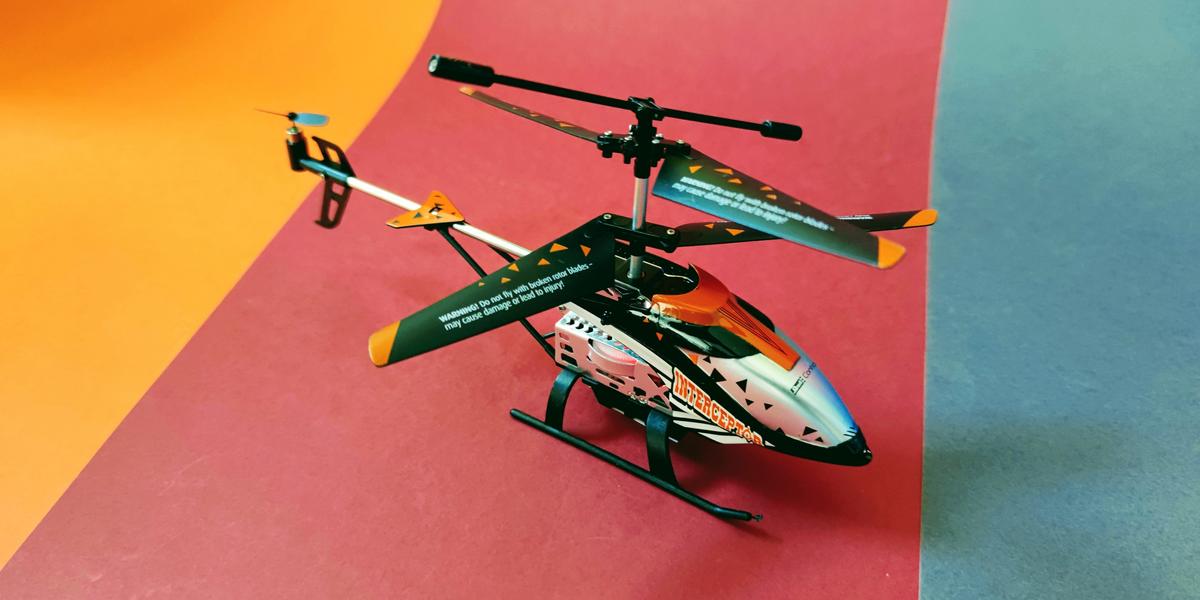 Guide to RC Helicopters: Remote-controlled helicopters for beginners from 20 euros

In this guide we present simple remote-controlled helicopters from 20 euros and give an outlook on high-priced alternatives. The cheap helicopters are not suitable for longer flights or filming. If you want to use a quadrocopter for video recording, you should take a look at the DJI Mini 2 (test report). We show more drones for beginners in the guide Which is the best video drone for beginners?

The entry-level devices from 20 euros almost exclusively use a coaxial rotor. Two main rotors, one on top of the other, run in opposite directions. It is controlled by adjusting the speed of the rotor. In addition, they almost always use a stabilizing bar and gyroscope for automatic stabilization. This ensures that the RC helicopter is relatively easy to control and maintains its altitude on its own. So it will automatically stand in a straight position when you let go of the controls.

It is more demanding in terms of control beyond 60 euros. Here you can already find RC helicopters with a classic main and tail rotor – also known as a single blade. With a more expensive pitch helicopter, the controls almost correspond to the behavior of a real helicopter. Here the rotor blades change their angle of attack in order to bring about a change in flight behavior. The RC helicopter with pitch control keeps the flight direction given to it. For example, if RC pilots move the helicopter forward, it will continue to fly in that direction, even if you let go of the control button. To straighten the helicopter again, you have to steer backwards. This makes handling difficult, but also allows more realistic and spectacular maneuvers.

The models presented here are driven exclusively by electric motors. The flight time is therefore quite short. Depending on the weight of the aircraft, the strength of the motor and the battery capacity, it usually ends after 5 to 10 minutes. Of course, there are also model helicopters with combustion engines. These cost more than 500 euros and usually weigh more than 2 kilograms. Then pilots need one Proof of knowledge and must pay attention to stricter flight safety regulations.

Radio connections with 2.4 GHz are common for remote controls – even in the affordable price range. These offer the advantage of a long range of 20 to 50 meters. In addition, they are not prone to interference when another RC vehicle is nearby. There are also devices with one channel in the MHz frequency range, but we advise against them because of their susceptibility to interference and the short range of up to 5 meters. Tiny flight models for indoor use also use remote controls with infrared. Here, too, the range is only limited to a few meters.

Due to the relatively short battery life, it is advisable to get a second battery. Revell and Amewi offer corresponding replacement batteries as well as rotor blades for some of the flight models.

Legal requirements: where can you fly a model helicopter?

Most of the remote-controlled flight models presented here are primarily intended for indoor use. If you still want to fly outdoors, you should familiarize yourself with the legal framework in Germany. Especially when a larger model is used.

The operation of helicopters, drones and model airplanes is subject to the Aviation Act (§1 LuftVG). In principle, models weighing up to 2 kilograms are allowed to fly on private property. However, there is always a minimum distance of 1.5 kilometers to airports, for example. Flying over specially protected objects such as military sites or power plants is taboo. The use of an aircraft in residential areas is only permitted up to a total weight of 250 grams. If the aircraft weighs more than 2 kilograms, the hobby pilot also needs proof of knowledge according to § 21e LuftVG for just under 30 euros. Further details on the provisions can be found at German model sports organization.

According to § 33, 37, 43.2 LuftVG, one is independent of weight and size Liability insurance for model owners mandatory for outdoor use. The costs for this are around 30 to 40 euros a year. Some liability insurance offer coverage for model flying for just a few euros on request. If you only use the aircraft in the garden, you do not have to pay attention to anything else with model aircraft up to a maximum of 2 kilograms. A model airplane insurance is always recommended for the use of a small RC helicopter outdoors. For models over 250 grams, you should choose a free field that is at least 1.5 kilometers away from a residential area. Here you should clarify with the owner of the property whether he agrees with it.

RC helicopters for beginners from 20 euros

We have the Revell Control RC Helicopter Interceptor for 23 euros a closer look. The remote-controlled helicopter with coaxial rotor is an RTF model. The term RTF stands for Ready-to-Fly – this means that the RC helicopter is ready to fly without any major modeling measures. The individual rotors are movable – users don’t have to tighten the screws any further. When the engine starts, the rotor blades align themselves automatically due to the rotational force.

Before the first use you have to charge the LiPo battery with 300 mAh. A cable with a USB-A connection is included for this purpose. This takes about 1 hour. Then you put the battery in the compartment provided on the underside and connect it to the electric motor with a cable. A 3-channel remote control is also included and transmits at 2.4 GHz. This requires three AA batteries (not included). Then you switch on the remote control and the helicopter using the power button. Then move the left control lever up and down once. Now the copter is coupled to the remote control.

For the first flight, we recommend choosing a flat surface – the floor or a table. The device should never be picked up, otherwise there is a risk of injury from the rotors. To take off, the pilot presses the black button to the left of the power button on the remote control – the helicopter then takes off. The emergency stop button is also located to the right of the on-off switch. The left control key serves as a throttle control and thus determines the flight altitude. The right control button moves the RTF model forwards or backwards or rotates it sideways around the axes. The controls require a bit of practice but are easier than expected thanks to the automatic stabilization. The aircraft maintains the altitude automatically. An anti-collision sensor is supposed to prevent collisions – but we don’t notice any of this in practice.

The Revell Control RC Helicopter Interceptor is primarily intended as a toy for indoor use. When flying outdoors, control over the aircraft is only possible to a limited extent due to the wind, as it weighs just 60 grams. It’s a lot of fun, but the battery lasts a maximum of 10 minutes – then the device has to be put back down on the floor. The Interceptor usually survives minor collisions with objects, but once the tail rotor and motor fell out in a collision and has been a bit loose since then. You shouldn’t expect too long a lifetime from the inexpensive toy. Revell adds a set of rotor blades as spare parts.

Revell offers a number of other helicopters for beginners in the price range from 20 to 40 euros, which differ primarily in terms of appearance and offer very simple processing. Most of these are only intended for use at home, especially smaller model helicopters with IR remote control such as Revell Control RC Helicopter Toxi. Revell recommends the toy for children from the age of 8, but parents should think twice because the risk of accidents and injuries should not be underestimated. At least unsupervised, children should not handle it.

RC helicopters for advanced users up to 500 euros

The more expensive the helicopter, the more demanding the controls. The only helicopter with a coaxial rotor in this price segment is the Carrera RC Sky Hunter. Amewi products from 60 euros are suitable for beginners who want to learn how to switch to a flight model with a single rotor. Due to their low weight and compact format, they are more suitable for indoor flights. Automatic stabilization using a gyro stabilizer makes life easier for the pilot. The helicopters from 100 euros in some cases offer a considerable increase in radio range. With the Amewi Buzzard Pro XL, this is about 120 meters.

You can get a real pitch helicopter with the Blade 230s RTF in an online shop from 320 euros. The price usually increases in size and weight. Unfortunately, this does not apply to the flight time. This is usually limited to a maximum of 10 minutes. The Jamara helicopters are aimed at advanced as well as professionals and are among the “heavyweights” with a weight of 800 to 1400 grams and have no place in residential areas. The Align T-Rex 450L scratches the mark of 500 euros and is something for experienced pilots.

Helicopters from 20 euros like the Revell Control Interceptor are a lot of fun and are well suited as a hobby in your own four walls. However, the batteries will not last longer than 10 minutes. Handling is easier than expected thanks to the coaxial rotor and automatic stabilization, but inexpensive copters are less suitable for outdoor use due to their low weight. In addition, one should not expect a long service life from these aircraft.

Manufacturers such as Amewi offer helicopters with single-blade rotors from 60 euros. From 300 euros you can get a larger pitch helicopter, which is also suitable for outdoor use. Due to the demanding controls, these are more for advanced users and professionals.