Guillermo Dávila’s son remembers when the singer called him an “accident”: “It was horrible growing up with that” 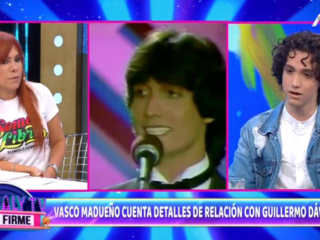 Vasco Madueño, unrecognized Peruvian son of the singer Guillermo Davila, appeared in the program “Magaly TV: La Firme” and expressed his feelings in the absence of his father in all this time.

In conversation with Magaly Medina, the 19-year-old said that his mother, Jessica Madueño, never referred to the Venezuelan singer in a negative way, despite his father’s mistakes.

“Since I was little my mother told me who my father was and she told me that he was a well-known singer. My mother never spoke ill of him and had the illusion of knowing him like any child ”, Vasco Madueño confessed.

“There have been few conversations and very superficial … From a very young age I never had a bad image of him. My mother never spoke ill of him ”, added.

At another time, Vasco Madueño referred to the statements that his father had in the past in the international press, where he described the birth of his son as a “accident”.