Haiti: a prosecutor indicted the prime minister for the assassination of President Jovenel Moise 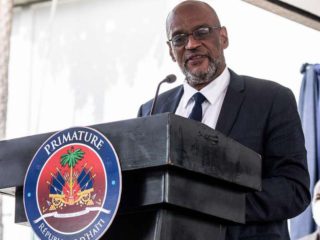 The attorney general of Haiti, that investigates the assassination of the president Jovenel Moïse, assassinated on July 7, asked the judge in the case to accuse the prime minister Ariel Henry for the crime and forbidding him to leave the country.

“There are enough compromising elements … to prosecute Henry and call for his direct indictment,” Claude wrote in the court order.

Prosecutor Bed-Ford Claude filed the order the same day he asked Henry to meet with him to explain why a key suspect in Moïse’s murder called him twice just a few hours after the murder.

At dawn on July 7, a group of eight hooded people shot at the residence of the Haitian president in the Pelerin neighborhood of Port-au-Prince, in an attack in which they received twelve bullets in the head, chest and abdomen. The first lady was also injured.

Claude said the calls were made at 4:03 a.m. and 4:20 a.m. on the day of the murder, adding that evidence shows that the suspect, Joseph Badio, it was in the vicinity of Moïse’s house at that moment.

Badio worked for the Haitian Ministry of Justice and the government’s anti-corruption unit until he was fired in May amid allegations of violating unspecified ethical standards.

In the two-page document, Claude states that calls lasted a total of seven minutes and that at that time Henry was at the Hotel Montana in Port-au-Prince.

He also noted that a government official tweeted last month that Henry told him that he had never spoken to Badio.

On Monday, the Minister of Justice, Rockfeller Vincent, ordered the head of the Haitian National Police to reinforce the security of prosecutor Claude because he had received “significant and disturbing” threats in the last five days.

The judge of the case, Garry Orelien, is obliged to investigate based on Claude’s request and has three months to determine if the facts of the case justify any measure. He would then issue an ordinance dictating what happens to the case, explained Brian Concannon, a consultant for the Institute for Justice and Democracy in Haiti.

Robert Fatton, an expert on Haitian politics at the University of Virginia, said it is clear that there is a struggle within the government between Henry and those who supported Moïse.

“We have a very confusing situation, a power struggle at the moment, and we will see who wins,” he said. “It is not clear where we are going and it is not clear what the international community thinks about all this.”

In recent days, the Haitian Citizen Protection Office, a kind of Ombudsman’s Office, announced that it had made the “objective and courageous” decision to demand Henry’s resignation and called for the international community to stop supporting him.

Henry has not specifically addressed the issue in public, although during a meeting with politicians and civil society leaders on Saturday he said he is committed to helping stabilize Haiti.

“The real culprits, the masterminds and co-authors and sponsors of the assassination of President Jovenel Moïse will be found and brought to justice and punished for their crimes,” Henry said.

More than 40 suspects have been detained in the case, including 18 former Colombian soldiers. Authorities continue to search for other suspects, including Badio and a former Haitian senator.

The investigation continues despite the fact that the court clerks have gone into hiding, claiming that they received death threats if they did not change certain names and statements in their reports.

In addition, a Haitian judge in charge of overseeing the investigation resigned last month citing personal reasons. He left after one of his assistants died in unclear circumstances. A new judge has been appointed.