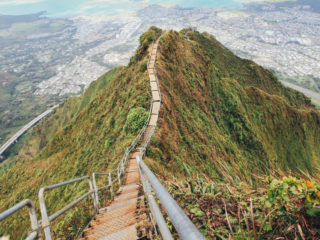 The City Hall of the American city of Honolulu, in Hawaii, has unanimously approved the dismantling of the famous Haiku trail staircase, also known as ‘stairs to heaven’, because its maintenance represents a high expense for the city, informs the local press.

The ‘stairs to heaven’, composed of almost 4,000 steps, are located on the island of Oahu and were built by the U.S. Navy during the Second World War. At the top of that trail a secret radio base was established, which was closed in 1987 and since then the trail has been officially closed to the public. Weight to it, the Haiku ladder attracts thousands of tourists every year, even though they risk fines of up to $ 1,000 for accessing that trail.

In its resolution, the Honolulu City Council notes that, among other things, the removal of these stairs is intended to stop the illegal entry of tourists, protect the environment, reduce maintenance and safety costs. “Due to rampant illegal invasion, the Haiku ladder is a liability and represents a significant expense for the city, “said one of the councilors during a session held last week.

Now, it will be the mayor of Honolulu who will give the final verdict on the future of the ‘stairs to heaven’, while the City Council has already allocated around 1 million dollars for the dismantling of that popular infrastructure.