Home
News
He is 22 years old and he stopped for 12 hours on a route with a sign to get a job: “I don’t want to go to another country to wash dishes.”

He is 22 years old and he stopped for 12 hours on a route with a sign to get a job: “I don’t want to go to another country to wash dishes.” 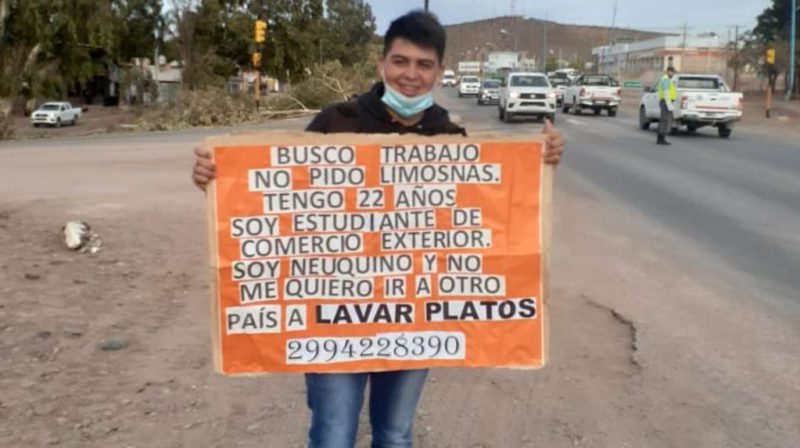 Nestor Spain spoke with his sister and his girlfriend. After an extensive dialogue he came to a conclusion: he must get out of the stillness that kept him paralyzed and thus get a job that would allow him to complete his studies.

The young man, a native of Neuquén Capital, cut out a piece of cardboard, bought an orange poster and printed a sentence in capital letters: “I am looking for work. I’m not asking for alms. I am a student of Foreign Trade. I’m from Neuquén and I don’t want to go to another country to wash dishes ”.

Read also: Leandro has been working as a bricklayer since he was 14 years old, he got a scholarship to study technology and is now looking for a job in the sector

His image holding the sign at the intersection of the main street of Añelo and the National Route No. 7 toured the local media. Nestor placed his phone underneath and waited. “Until now no one called me”, revealed before the consultation of TN.

The student had to travel the more than 100 kilometers that separate his house from the oil town to bet there, in search of a fortuitous encounter that would put his life back on track. “I did it with my motorcycle. I woke up at 4.30, got there at 6.30, had a coffee at the service station and stopped. I was 12 hours in the place”, He counted.

“Thank God it went a bit viral, but I’m still out of work. I want to finish my degree in Business Administration in Foreign Trade at the Pan-American Institute of Higher Studies. I have a year left and during 2021 I had to stop studying because I have no money to pay“Said the Neuquén.

“Currently I live with my mother Paulina and my aunt. She instilled in me the subject of the study. I am looking for work in the Vaca Muerta sector. I know that the operational bases are in Buenos Aires. I did this because I am not ashamed; shame is stealing, not going out on the street“Said Nestor.

The protagonist of the story narrated that her older sister lives in the United States and it was she who suggested that she try her luck there. “Many criticized me because they said that I denigrated those who wash dishes there. Yes, they earn better than here, but they are doing it illegally and taking the place out of others who may need it and they have their papers in order, “he argued.

And he continued: “I would like to go to another country, but as a professional. That a company hires me to go abroad. I am a boy scout, and one of our pillars is to be optimistic ”.

Why are you looking to work in the oil industry?

“I like the industry, here I can exploit my potential, it is the heart of the Argentine economy. I already worked in a company here in Añelo, in the sector, I was able to gain experience in the finance area. The city demands you, it is not that you come here, you win well and nothing else. At that time they would pick me up at 4.30 in the morning and I would return to my house at 7.30. I would come and go to university ”, he recalled.

“Today I can’t pay for university, two nights ago my family told me not to get off, that something was going to occur to me. Two weeks ago I was about to enter an international company. I had four interviews, of which two were in English and Portuguese. They finally told me they couldn’t hire me“Said Nestor.

Yesterday, during the more than 12 hours that he remained in the Neuquén town, several neighbors and merchants approached to provide him with water and food. “People were very warm to me. Many unionists and unionists even passed by and told me to pass the CV to them. But it stayed there”, He indicated.

“They offered me a job as a bricklayer, but I rejected it for a simple reason: I am not going to give what they are asking me because I have no knowledge and I don’t want to look bad. I am looking for an administrative job for a hydrocarbon company. I know that something is going to appear, that someone is going to give me a chance. For the moment I will continue to be here ”, Néstor completed.