How dangerous would the bankruptcy of real estate giant Evergrande Group be for the Chinese economy? 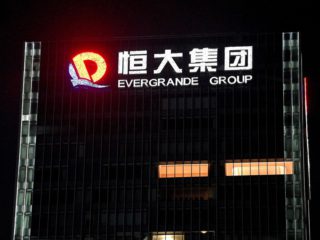 The liquidity crisis that has hit the Chinese real estate giant Evergrande Group is raising concerns about the beginning of the breakdown of a housing bubble in China that could translate into repercussions in the total financial system of the Asian country.

Amid fears of a possible bankruptcy of the company, Evergrande shares have dropped almost 80%, taking $ 20 billion off the market value so far this year, including 12% this Tuesday alone, bringing the price to a minimum in six years. The Shanghai Stock Exchange ceased sales of the firm’s bonds amid huge swings in their price.

The company, which is listed on the Hong Kong Stock Exchange, is the most indebted Chinese real estate firm: it has liabilities for a total amount that exceeds $ 300 billion, affecting more than 250 banks and non-banks, after several years of loans to finance rapid growth. In the first days of this month, some of his creditors demanded the immediate return of the money. On Monday they were summoned multiple investors in front of the company’s headquarters in Shenzhen to demand the repayment of their loans to Evergrande.

The giant’s subsidiaries maintain 934 million yuan (about $ 145 million) on past due obligations. This situation could “lead to a crossing default” that would have “an adverse effect on the group’s business, prospects, financial status and results,” the firm said in a statement sent to the Hong Kong Stock Exchange.

The company whose real estate sales have been declining since last June experienced a new descent this month, which blames negative media reports that erode investor confidence.

Evergrande’s debt has been repeatedly downgraded by rating agencies given the company’s difficulties in managing the deficit. The group announced this month that it was in negotiations about the sale of some of its assets but that there was no progress so far.

Looking for a solution

From the Guangzhou-based company, they admitted Tuesday that they face “unprecedented difficulties” and that they are under a “tremendous pressure“, which is why they have hired a group of financial advisers to explore” all feasible solutions “to alleviate their crisis.

Although the firm denied on Monday information about a possible bankruptcy or restructuring as “contrary to reality”, advisers drawn to Evergrande include specialists from Houlihan Lokey, which tops the list of U.S. restructuring consultancies and has cases like those of Lehman Brothers, Enron, WorldCom y Noble Group.

“Evergrande’s declaration marks the first step of a restructuring, which normally involves late payment of interest, non-payment of interest or delays with haircuts “, commented to Reuters James Shi, a troubled debt analyst at analytics firm Reorg. The expert added that the liquidation will take place only if the restructuring fails.

The severity of the impact

One of the most troubling questions goes beyond the fate of the second largest real estate agency in the country. Experts foresee the level of instability that the bankruptcy, rescue or restructuring of this giant could cause.

“For a company of such a scale, I do believe that its instability threat to the economy China. The severity of this threat will depend on the extent to which the Chinese government can manage and control these risks. ” commented Lan Teng, Associate Director of the China Studies Program at the University of Michigan (USA), to Barron’s.

According to the expert, an important factor in China’s growing real estate market is confidence in the government’s ability to sustain this boom. “So maintaining this trust is crucial“he explained.

Last week, Chinese regulators gave the green light to Evergrande’s negotiations with banks and other large creditors. This could be a good sign for investors, as the negotiations would buy time for a orderly disintegration of Evergrande, as opposed to a lawless bankruptcy in a country with few precedents for large bankruptcies.

“I am more confident now than at any other time this year that this will be a controlled detonation. It is a long way from proving financial stability in China “, opined Samy Muaddi, manager of emerging markets corporate bonds at T. Rowe Price.