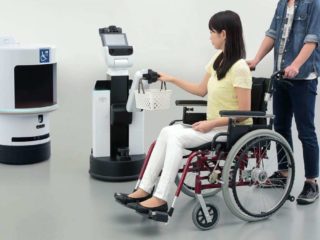 The Tokyo Olympics could be to robots what the Tokyo Games of 1964 were to electronic timekeeping: the breakthrough. At that time, the worldwide attention helped the watch manufacturer Seiko to become a worldwide watch brand. This time around, the sports spectacle could accelerate Toyota’s robotics division into a serious vendor. Because machine helpers from the car manufacturer will populate the stadiums and Japan if the major event, which has already been postponed, should take place this year at all.

One of the mechanical helpers has even warmed up publicly for his assignment. The one-armed one Human Support Robot von Toyota carried the torch for a disabled runner during the Olympic torch relay. In the stadiums, he should lead the disabled and other guests to their seats, from which the attendees of athletics events could then see the next Toyota robot in action.

Robot hums across the field

FSR, the Field Support Robot, should be buzzing across the field in the Olympic Stadium. The engineers have based its design on Toyota’s concept for autonomous “e-pallet” commercial vehicles that are to circulate in front of the stadiums (including a quickly rechargeable solid-state battery on board, which is considered the next generation of batteries). But the FSRs will not transport people, but spear, disc and bullet. By the way, their use will be a good test for the developers as to whether the technology works the way they want it to.

In addition, the life-size, remote-controlled T-HR3 is used in other parts of Japan as a kind of cheerleader. It’s one of Toyota’s most fascinating humanoid robots right now. The device is very flexible and does not lose its balance even with karate-like gymnastics. Normally, the machine therefore imitates the movements of people or performs programmed movements with filigree precision. During the games, however, it is planned that T-HR3 will perform the movements of the robot mascots as a pre-gymnast Miraitowa and Someity copied to spread the Olympic spirit far away from the stadiums.

A strap-on exoskeleton could also be used to help rescuers lift heavy objects. The manufacturer in this case is a small manufacturer that was spun off from the major sponsor and technology group Panasonic. The device is already helping workers in logistics to carry them.

Are spectators coming or not?

Toyota has also designed a number of other robots, the usefulness of which could, however, be called into question by the corona pandemic. Because the organizers have not yet decided whether spectators can even enter the stadiums because of the pandemic. Foreign tourists have already been locked out.

There is the telepresence robot T-tri, an almost human-sized, narrow screen on wheels that viewers can log into from a distance. The plan: Capture the atmosphere with a 360-degree camera and telecommunicate with guests or athletes in real time (and real size). Toyota’s developers believe that online communication works better when it’s real-life. However, communication will be difficult without a spectator.

The fate of the DSR (Delivery Support Robot) is also uncertain. It is a barrel-shaped being that could deliver drinks and snacks to viewers. Perhaps the robot now has to concentrate on the accompanying staff, Olympic cadres and local helpers. But maybe viewers will be admitted after all. The decision should be made by June 24th.

Whatever the outcome of the Games, the Olympic sponsors and their robots have followed the government’s plan to use the Olympic Games as a stage for high-tech from Japan. And robots in particular play a major role in industrial policy in Japan. Because the economic planners hope to duplicate Japan’s world market leadership in industrial robots in everyday machines in the future.

Not only large corporations play a role in the attempt. The robot developer Kentaro Yoshifuji wants to open a handicapped-friendly café in June, in which remote-controlled robots will greet, operate and talk to guests – and thus give bed-ridden severely disabled people a job.

As early as 2018, he demonstrated how it should work: his serving robot is called OriHime-D. This is a larger version of the previous main product from Yoshifuji’s company OryLaboratories. The artificial waiter is 120 centimeters tall and can carry things with his two arms. Yoshifuji’s idea is that ALS and SMA patients who can no longer move their bodies can control the robot with their eyes and thus earn money. It would be one of the cases where robots don’t replace jobs, but create them.