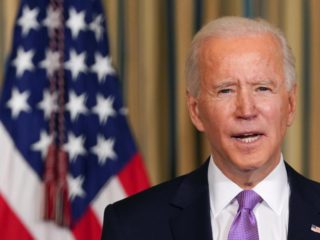 US President Joe Biden signed an Executive Order late last week obliging millions of American workers to be vaccinated against COVID-19 in the future.

It is astonishingly comprehensive for a country like the United States of America. The order stipulates that all companies with more than 100 employees must either be vaccinated or be tested weekly for SARS-CoV-2 – the latter has not yet existed at the US federal level.

Also new: employers must finally give their employees paid leave for vaccinations. The ordinance also applies to most healthcare and nursing home workers, as well as those who work for the US federal government or a state contractor.

A tough instrument for the United States

Government employees can face disciplinary action if they refuse to consent to either a vaccination or a regular test. If properly implemented, the Biden Order will reach around two-thirds of American workers (although it is unclear how many of them have already been vaccinated).

The arrangement is part of a multi-pronged plan to try to get the pandemic under control in the US now that the Delta variant is rampant. This includes measures such as requiring employers to grant said paid leave for vaccination – and the rule to require proof of vaccination or a negative test at large indoor venues.

Paid vacation is considered one of the best vaccination incentives in the United States, where personal days are traditionally difficult to get and vacation entitlement is small. But here, too, Biden’s order only applies to larger employers with 100 or more employees.

Who is left out in the rain

However, Biden takes out quite a lot of people with his arrangement. This includes the self-employed, companies with 99 or fewer employees and the increasingly large army of gig workers who work for transport companies, package companies or service platforms but are not employed.

In doing so, they would benefit most from measures. They make up a large and growing percentage of the working population in the United States – and are often so poorly paid that they cannot take a day or two twice to vaccinate and clear up the side effects.

Biden, the progressive politician, has also forgotten another important group: his order does not apply to the army of unemployed, who make up 8.4 million Americans. They too must make time for the vaccination at their own expense. There is of course no more compulsory testing than compulsory vaccination.

Biden has previously insisted that incentives such as money, food and other “goodies” could encourage people to get vaccinated. However, 80 million people in the US have still not shown willingness to do so. Only 177 million Americans are fully vaccinated, which is only 62.5 percent of those eligible and only 52 percent of the total population. In short, Biden tried the carrot – now he’s opting for the stick.

Given that around 150,000 new cases are still being reported in the US every day, Biden seems to be blaming the unvaccinated for the disastrous situation – and he is counting on many people in America to think the same way. He addressed the unvaccinated people directly: “We have been patient. But our patience is slowly running out. And your refusal has cost us all dearly.”

Biden’s plan also includes measures to make it easier for people to find places to get vaccinated. When the vaccine first came out in December, many Americans were confused about the vaccine sites and options available. Once booster vaccinations are approved, citizens can visit the new website Vaccines.gov Find a vaccination center and find out which vaccines are available there – and for many agencies also which dates are available. A toll-free number will also be available – in over 150 languages.