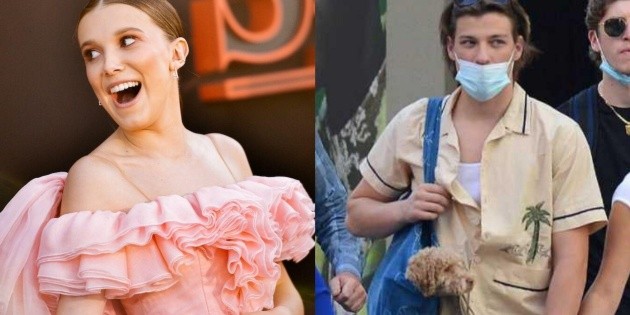 Social networks exploded this past weekend with the report that Millie Bobby Brown, recognized for her role as Eleven on Stranger Things, has a new boyfriend and was seen publicly. The media quickly identified his partner: Jake Bongiovi, son of singer Bon Jovi. Here we will tell you everything we know about them!

The young people went for a walk through the streets of New York and the cameras of the agency The Grosby Group were present to take the photographs that quickly circulated on the internet. There we could see them dressed informally, both with COVID-19 masks, and he carrying a bag with the actress’s dog.

According to various sites, The two met through mutual friends and began to get along instantly. Although neither Brown nor Jake have made the relationship official, when they see them holding hands in NYC, they already take it for granted, after the rumors began in early June, when he published a photo where they were seen together.

At that time, the image only said “Best friends”, so at that time it was believed that they had a friendship, but now we know that it is much more than that. The paparazzi who registered the moment of their departure assured that they continued on their way and never let go of the hand.

It is not the only romance that is known of Millie Bobby Brown, since in 2018 she announced her courtship with Jacob Sartorius, but then they separated. She later had a brief affair with Joseph Robinson, a rugby player, whose reasons for breaking up are unknown. There were also rumors of rapprochements with Noah Schnapp and Romeo Beckham, although they were not confirmed.