Humanoids: When humanoid robots take off and submerge 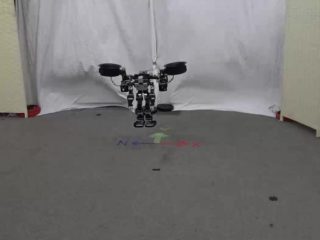 Walking on two legs is at the center of most research on the locomotion of humanoid robots. A group of Japanese researchers are already thinking beyond this: They also want to teach robots to fly and swim. Tomoki Anzai (University of Tokyo) presented a humanoid robot at the Humanoids conference that can lift itself into the air with the help of a flight unit.

Mountain rescue as a target

The flight unit consists of two propellers, each 130 millimeters in diameter and a maximum thrust of 18 Newtons. That is enough to lift the unit’s own weight of 1.35 kilograms together with the 1.4 kilogram robot. Anzai said that the researchers opted for a bicopter because its angle of attack can be more easily adapted to the changed center of gravity when the robot is being transported than with a quadrocopter. In the video that the scientist showed, it is easy to see how the robot has to assume a starting position before take-off, which positions the center of gravity directly below the direction of thrust of the propellers.

The robot itself is a commercially available one KHR the Kondo company, whose head has been replaced by a camera, slightly reducing its size to about 39 centimeters. With the help of this camera it is possible for the robot to recognize people and to signal this with a preprogrammed greeting gesture. This alludes to a possible application of the system in mountain rescue that Anzai mentioned, but which is likely to be far in the future, as well as the interaction of several flying humanoid robots in the construction of buildings.

Another study by the research team, presented by Tasuku Makabe (University of Tokyo), which deals with the use of humanoid robots underwater, goes in the other direction, so to speak. Components from Kondo were also used for this robot and sealed watertight. There are already underwater robots, says Makabe, but their design is mostly very simple. A humanoid robot has more degrees of freedom, which could also prove useful when working underwater. In addition, the environment in the water offers the opportunity to carry out experiments with humanoid robots in suspension that are difficult to carry out in any other way. For example, falls during running attempts occurred much more slowly if they were carried out in the water instead of on land.

Swimming required a buoyancy aid to be attached to the head of the robot, otherwise it could hardly move. The alternating movement of the legs as when crawling turned out to be a little faster at 46.56 mm / sec than the dolphin style, in which both legs are raised and lowered at the same time and which brought it to 36.96 mm / sec. You could swim curves by moving just one leg. However, the direction has so far been difficult to control. The robot was very susceptible to interference, such as waves reflecting off the walls of the small pool, explained Makabe. The floating humanoid robot is therefore initially an interesting feasibility study, for which it must remain open whether and when a practical application will result from it.