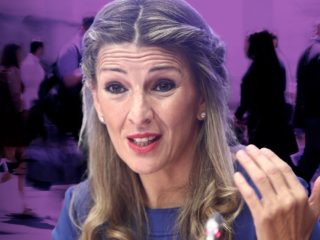 More than a hundred people have concentrated at the gates of Congress against the validation of the decree law that obliges delivery companies to hire their workers, demanding the resignation of the third vice president and Minister of Labor, Yolanda Díaz, and demanding to be able to continue as self-employed and not salaried workers.

In statements to the media, the president of the Professional Association of Autonomous Riders, Jordi Mateo, has criticized the regulation considering that it “discriminates” and “deprives them of the freedom of flexibility” that, it has said, they have counted as autonomous until now. “We want to continue to be autonomous, but not with the current model, but improved as in France and Italy, with greater protection, but in no case with a precarious contract,” he asserted, ensuring that the contracts that the platforms will now offer, through of “external companies”, they will remunerate them “in the best of cases with 400 or 500 euros and, even so, putting their own vehicle and mobile”.

The Vice President of Labor and Social Economy, Yolanda Diaz, has wielded this Thursday in the Plenary of Congress, during his defense of the decree law on the working conditions of the distributors, the well-known ‘rider law’, that «one does not choose if he is working or if he is self-employed », but “what is available in labor reasons”: “No one would think of being able to choose between being employed or self-employed in a factory or in a trade,” he asserted, highlighting that this “would mean the disappearance of the norm labor with all its consequences ».

Thus, the vice president has stressed that a provision of services “will always be labor if there is dependency, whatever the way it is manifested”, something established by the Supreme Court in its sentence last September to unify doctrine, but also other courts In whose judgments, he has affirmed “the same concept beats: that the application of labor law is not optional.”