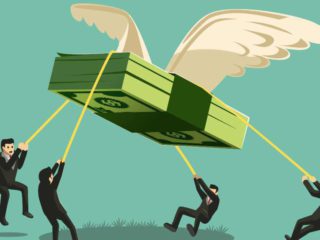 Exactly a century ago, in May 1921, the historic “London Ultimatum”, the summit that established the payment schedule that Germany had to meet for war reparations to the Allies, as ordered by the Treaty of Versailles signed two years earlier, as a Germanic surrender and the end of the First World War.

Although the financial problems of the Weimar Republic already came from the expenses that the German Empire had incurred to solve the then called “Great War”, the London summit marked a milestone from which the devaluation of the mark accelerated out of control, and finally go into free fall shortly thereafter.

Surrealist scenes of this hyper were marked by fire in the collective memory of the Germans, which could explain their current obsessive prolixity in the administration of public coffers. At the peak of the crisis, monetary issuance went so crazy that the paper on which the banknotes were printed cost more than the face value of each.

The annual inflation rate peaked at 182 billion percent – a single dollar was trading at 4.2 trillion German marks. The State issued its extremely devalued Papiermarks at such a speed that they only printed one side of the bill. The worthless wads of money were used to power stoves, to wallpaper rooms, and even to make blocks of paper as children’s games. The last banknote of the hyper German accumulated 14 zeros: to get an idea of ​​the seriousness of that devaluation, it is enough to compare it with our famous banknote issued in 1981, of “barely” one million pesos.

From so much counting and calculating zeros, a type of stress arose in the German population that the press of the time baptized as “Heart attack of the zeros”. It was not for less: the workers and public employees collected their wages daily so as not to lose by a landslide against inflation. At noon, they ran with baskets and even wheelbarrows full of money to buy any merchandise, which would surely be more expensive at sunset. You couldn’t live like that: the infant mortality rate skyrocketed and, among adults, the suicide rate.

But human creativity in the face of economic adversity never ceases to amaze us. To fill the void left by the central government’s monetary authorities, the idea of ​​creating a parallel means of payment arose, run by municipalities, chambers of commerce and companies with payment problems: this is how Notgeld (“emergency money”) was born. , a kind of Germanic patacón mixed with rudimentary ticket-basket. Closer to barter than federal legal tender money, the Notgeld was exchanged for essential goods at the local level, as a currency for the survival of the frayed social fabric. The peculiarity of the Notgeld was its unexpected quality of reserve of value, in the midst of a hyper that would go down in history.

These vouchers were illustrated with a remarkable variety and quality of folk motifs from the Germanic tradition, which quickly made them objects of high interest for collectors and galleries of art and numismatics. In contrast to the depreciated papiermarks, the notgelds became aesthetic objects whose price made them attractive as a source of collection and even investment for municipalities and private savers. A suggestive precedent to start thinking about the current experiment of NFTs (Non Fungible Tokens), those new digital works that are increasingly expensive, which are embedded in the cryptocurrency blockchain and revolutionize the art market.

// The NFT boom: they auctioned digital works for 16.8 million dollars

Everytime it rained it stopped. At the end of the stormy year 1923, the government erased the strip of zeros that no longer fit on the banknotes, and invented the Rentenmark, a supposedly land-backed transitional currency and other public assets, which miraculously managed to regain the trust of desperate Germans. A controversial figure emerges as the guarantor of this timely monetary recovery: the banker Hjalmar Schacht, appointed as head of the Reichsbank (the German central bank at that time) as guardian of the fiscal discipline lost during the years in which the Weimar Republic monetized its debts until the Papiermark exploded like confetti.

Schacht’s incredible story synthesizes the tensions and contradictions of Western capitalism between the wars. Of an aristocratic financial genius who brought the republic out of the monetary well and international discredit, Hjalmar ended up being Adolf Hitler’s economic right-hand man. Although ideologically distrustful of Nazism, the banker rose to the Third Reich, first as an adviser and campaign collector, then as head of the Reichsbank and finally as Minister of the Economy.

But the internal bidding kept him away from the Hitler girl table, until he was accused of plotting in an assassination attempt against the Führer, so went to one of the concentration camps that his financial mastery helped build. But the ironies of his fate continued: when Hitler fell, the Allies rescued him, but to put him on the dock at the Nuremberg trials, where he was one of the few leaders acquitted. His career continued for many years, as star rescuer of emerging economies in emergency.

The causes of German hyperinflation are still debated to this day, which is logical, since Germany finished paying off its war reparations just a decade ago. The context of high monetary emission that runs through global finances, affected by the pandemic, reopened the historical rift. The most heterodox, clinging to John Maynard Keynes’s criticism of the Versailles Treaty, insist that the excessive reparations demanded of the defeated Germany were the main cause of hyperinflation.

// Elon Musk’s mascot and the world’s most expensive jokes

On the other side, they point out that the new studies by academic historians confirm the guilt of the German government, both in unleashing the war and in financing it irresponsibly, giving mercilessly or shamelessly to “the little machine”: they even question the usual consensus that the reparatory burden imposed on the Weimar Republic outside priceless.

More engrossed in the short term, Argentines entertain ourselves with the version “for dummies”Of the discussion on the incidence -or not- of the overflow issue in the inflationary acceleration. Luckily Alberto Fernandez he observes the problem from a historical perspective: “The fiscal balance no longer exists, the central countries have broken it. All of Europe has a mind-boggling fiscal deficit. We repeat these things here because they remain from the ’90s ”, the President justified himself before CNN, repeating the path of his Chief CFK and General Perón, who in the middle of the last century analyzed the present of a world at war and confused him with the long future of the economy and global trade. And he screwed up, as shown by the forceful book that the economic historian Roberto Cortés Conde has just published (along with other authorities on the matter), entitled: La Economía de Perón (1946-1955).

But that is another story. The same.

Silvio Santamarina is the author of Historia de la Guita: the Culture of Money in Argentina.