“I curse the Austrian State”: Erdogan condemns Vienna for having hoisted the Israeli flag on the roof of the Federal Chancellery 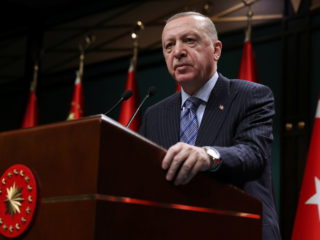 Turkish President Recep Tayyip Erdogan on Monday condemned Austria for having raised the Israeli flag on the roof of the Federal Chancellery amid escalating tension between Israelis and Palestinians.

“I curse the Austrian state. It seems that [Austria] he is trying to make Muslims pay for the genocide to which he subjected the Jews, “Erdogan said according to collect Austrian media.

Last Friday, Austrian Chancellor Sebastian Kurz announced that “the Israeli flag was raised on the roof of the Federal Chancellery as a sign of solidarity with Israel.” “Terrorist attacks against Israel must be condemned in the strongest possible terms!” The minister added.

Today was used as a sign of solidarity with #Israel the Israeli flag is hoisted on the roof of the Federal Chancellery. The terrorist attacks on Israel are to be condemned in the strongest! Together we stand by Israel’s side. pic.twitter.com/FR42K3iA4z

The Turkish president also declared on Monday that his American counterpart, Joe Biden, “he’s writing a story with bloody hands“in the conflict between the Hebrew country and the Gaza Strip, after having given the green light to the sale of high-precision remote-controlled weapons to Israel for a total of 735 million dollars.

Earlier, Erdogan also urged the world to stop the “terrorist state” of Israel, which “has crossed all limits.” “It is the duty of all humanity to resist aggression [de Israel] against the Palestinian cities and Jerusalem, “he emphasized.