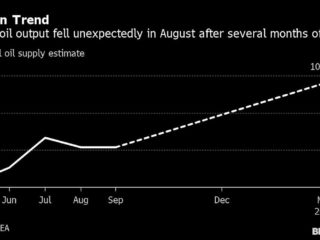 (Bloomberg) – The world will have to wait until October for additional supplies of oil, as production losses from Hurricane Ida canceled out OPEC + increases, according to the International Energy Agency (IEA).

Consumers should have enjoyed a “solid increase” in production as the Organization of Petroleum Exporting Countries and its allies continued to reactivate their dormant capacity, the agency noted in its monthly report. Instead, world supply fell 540,000 barrels a day in August due to unexpected interruptions and will remain stable this month.

“Unplanned production disruptions have temporarily halted the upward trend in global oil supply that began in March, but growth will resume in October,” said the Paris-based IEA, which advises developed economies on energetic politics.

The supply disappointment has not had a great impact on prices due to downtrends in fuel consumption. Global demand for oil has been falling since July, due to mobility restrictions that have led to an increase in COVID-19 cases in Asia, the IEA said. Crude has been trading around $ 70 a barrel in New York for most of this month.

Global fuel consumption will contract by 310,000 barrels a day on average between July and September, the IEA noted. However, there are signs that the coronavirus resurgence is waning and the agency expects a strong pickup in demand, of 1.6 million barrels a day, next month, with continued growth through the end of the year.

Changes in supply and demand have kept the prevailing trend in the oil market this year – the decline in inventories – remaining intact. Fuel reserves in developed economies fell by 30 million barrels last month, falling 186 million barrels below the five-year average, according to preliminary IEA estimates. This month there should be “strong reductions” again, according to the agency.

“Only in early 2022 will supply be high enough to allow oil reserves to be replenished,” according to the report. “Meanwhile, the strategic oil reserves of the United States and China can help in some way to close the gap.”

Hurricane Ida, a Category 4 storm that hit the US Gulf Coast on August 29, initially disrupted production of 1.7 million barrels of oil per day. Weeks later, the industry is still struggling to bring many of the affected fields online and the region’s crude production is expected to decline to 650,000 barrels a day on average this month, according to the IEA.