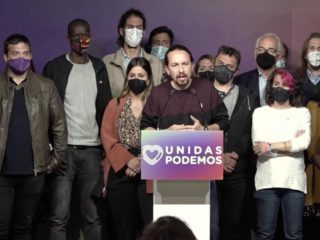 «To be useful for Podemos is my aspiration. It is evident that to this day I am not contributing to add ”. With these words Pablo Iglesias has announced this Tuesday that he is leaving all his positions and is withdrawing from the first political line after his failure in the elections held in the Community of Madrid.

Podemos has achieved 10 deputies, 3 more than in 2019. But the result is devastating for Iglesias, whose landing in Madrid politics has not been far from the shock that he thought. Despite the strategy of fear and chaos that it inoculated in the campaign, the triumph of Isabel Díaz Ayuso has been overwhelming. The PP candidate has gone from 30 to 65 deputies and has added more support than the three parties of the left combined.

Iglesias has not abandoned his victimizing tone or in his farewell, in which he has claimed to feel like a “scapegoat” that mobilizes the right. “One has to know how to withdraw,” he pointed out. The purple leader will not collect the minutes in the Madrid Assembly, but his economic future is resolved for at least 15 months, the time in which he will be able to fully enjoy the compensation of 5,316 euros as former vice president.

“I am not a political figure who can help our political force to consolidate its institutional weight,” he admitted in an urgent appearance after confirming the poor results.

“I have become the scapegoat that mobilizes the most anti-democratic effects, political intelligence has to be above another consideration,” he added.

The podemita has constructed an implausible story to accompany his withdrawal, and has blamed the “unprecedented aggressiveness of the PP and the far right” and an “unprecedented normalization of fascist speeches in the media.”

Iglesias has described the results of the 4M elections in Madrid as “an impressive electoral success for the Trumpist right and a consolidation of the extreme right” which, he said, “is a tragedy.” However, he has had no choice but to acknowledge Ayuso’s incontestable victory. “There is no doubt that this is what the majority voted, with historical participation,” he admitted.

The Podemos candidate has not revealed his immediate plans, but he has affirmed that although he is not in the institutions “he will continue to be committed to his country.” He has also assured that “it will not be a stopper” for the leadership of Podemos and has trusted that Yolanda Díaz will become the next secretary general.

The former second vice president of the Government has indicated that the left “has failed” in these elections. “Our result, although we have improved it, is an insufficient sum to be an alternative to the government on the right,” he added.