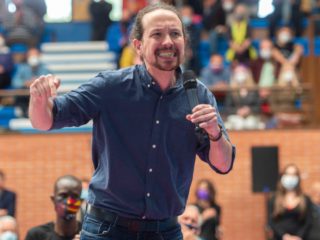 Pablo Iglesias he leaves the political front line, but will retain many of the benefits he has made during his brief but brilliant career, such as bodyguards. After requesting his compensation as a former vice president, the unsuccessful candidate to preside over the Community of Madrid for Podemos has become part of the former high positions with police escort in charge of the state coffers. Iglesias will maintain nine bodyguards for the time being and Interior will guarantee protection from podemita for at least the next two years.

From now on and for the next few months, Pablo Iglesias will leave his home in Galapagar guarded by 12 Civil Guard officers who watch day and night for the security of the home that he shares with his sentimental partner, the Minister of Equality, Irene Montero. Iglesias will leave in an official vehicle driven by a police officer from the Ministry of the Interior who will be his last line of dynamic escort during his movements. Another vehicle, called by the police “S1”, will escort the car of the former politician in service to give him cover. In that second car there will be two or three more agents, depending on whether Iglesias is traveling with one or two agents in the first car. The policemen assigned to Iglesias as bodyguards will be relieved in two shifts, four agents in each plus a fifth who must act as a bridge between the two relays.

Over the next few months, the former Vice President of the Government Pablo Iglesias will have nine bodyguards: agents assigned by the Ministry of the Interior for your personal protection. The figure is somewhat lower than the 13 he had when he was in office, but according to police sources consulted by OKDIARIO, they are more than enough effective for the new activity that Iglesias decides to carry out, whatever it may be.

This preventive measure has the approval of the Secretary of State for Security, dependent on the Ministry of the Interior, and will be coordinated by the Central Protection Unit. Before, when Iglesias frequented Moncloa with a ministerial portfolio, the security that protected him was managed by the special police station of the Presidency of the Government.

The four agents who will follow Iglesias day and night plus the reinforcement police are right now in a state of alert due to the recent elections in Madrid, but as the weeks go by that alert will be lowered and with the passage of time. months it is expected that the device will be reduced without implying a breach for the security of Iglesias. The sources consulted by this newspaper assure that changes in the security of personalities or former high-ranking officials not only depend on the fact that they have stopped exercising a specific job at a certain time, which also largely depends on the social climate of the moment.

The week of letters with bullets Arriving at the Interior and Civil Guard units, all the bodyguards increased their protection measures for the protected as the veracity of the threats received was unknown.

Other examples are government crises, in which there are changes in the holders of ministerial portfolios, for example, or when there is a drastic change such as the one that occurred after the motion of no confidence that the government cost Mariano Rajoy. Overnight, two governments had to be protected, practically.

In the case of Pablo Iglesias, the police sources consulted by OKDIARIO appreciate a real need to protect the character, but explain that the current situation will decrease in a matter of months, but yes, the church escorts will remain.

And it will be like this at least until inside two years, which is when the first evaluation of security and need for church escorts is carried out. Depending on the situation of that moment and, above all, on its presence in society and how it is perceived, It will be decided to extend or not that protection.

In Spain it is estimated that between 200 and 300 Interior agents They are dedicated to protecting people who no longer hold public office, but who once did. There have been examples of politicians who have maintained police protection for up to 10 years after leaving any public activity. In cases of very prominent characters, this protection can last for life. The experts consulted by this newspaper believe that Iglesias will not be one of those cases in which the bodyguards stay forever.

In addition, it should be remembered, Podemos decided on its own and risk to assign security jobs to people without any training in the matter, such as those arrested in the disturbances at the Vox rally in Vallecas. A former municipal worker and the brother of a boxer who guards the Galapagar house were arrested there for stoning the police. They are free with charges, paid by the party and at the disposal of Iglesias in case the former vice president considers the bodyguard that he will retain as a former high position insufficient.