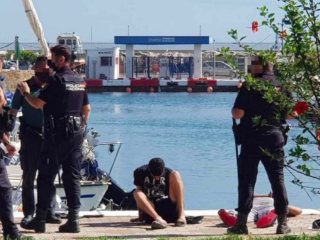 The National Police arrested this Monday in the Marina Hercules marina from Ceuta to a total of six illegal immigrants after they threatened users and guards on the pier with a knife with the intention of steal two boats and reach the Peninsula.

Police sources have confirmed to expert in migration policies, Rubén Pulido, that those arrested are from Algerian origin and that they accessed Ceuta in one of the last massive entrances to the autonomous city.

The events took place around 10:00 am. The detained immigrants had been trying for days to access the port to steal a ship with which to set out for the Peninsula. In their last attempt, this morning, they used a razor and broken glass bottles to intimidate the workers of the Ceutí marina.

🚨 The National Police detain a group of illegal immigrants who used a knife and a glass bottle to threaten users and guards at the marina of #Ceuta with the intention of stealing two boats to go to the Peninsula. pic.twitter.com/JaQ8IsI2JL

The six illegal immigrants arrested are already in the police station and will be brought to justice.

So far this year, a total of 9,790 illegal immigrants have entered Ceuta and Melilla by land, according to data from the International Organization for Migration (IOM) collected by Rubén Pulido. This figure represents an increase of 634.98% compared to the 2020 statistics.

The Government of Ceuta acknowledged last week that 3,000 Moroccans that still remain in the city after the avalanche last May represent a monthly expense of three million euros, at a rate of 1,000 euros per month for the accommodation and assistance of each immigrant. All this without taking into account what the central government allocates, directly or indirectly, through NGOs.

Of the 3,000 Moroccan citizens, about a thousand are unaccompanied foreign minors (menas) that have already begun to be dispersed by different communities of the national territory, such as Andalusia and the Balearic Islands.

Some of the illegal immigrants who came to Ceuta and Melilla in the last few weeks they’ve already tried to get out of town, alright hiding in trucks that embark on ferries bound for the Peninsula or using documentation belonging to other people. So far, the vast majority of these attempts have been thwarted by State Security Forces and Bodies.