In the jungle of the cursed mines 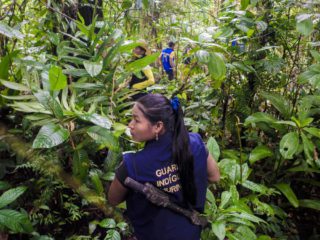 In the place of the legs there was a huge nothing. The townspeople saw that obvious absence, that hole, in the man dressed as a combatant to whom two companions were coming down from the hill. The uniformed men were walking through the jungle when one of them stepped on a mine and jumped into the air. The armed men cursed the locals for not having warned them that the surroundings were littered with mines and forced them to transport the wounded man to the Atrato River. A few days later the guerrillas appeared there, from the opposite side, to scold them for having helped the mutilated combatant: “Is it that you are paracos?” The question hid a death threat. The neighbors packed their things, put the pigs and chickens on the rafts and fled the town, which became the ghost place overnight. Recalling that, the equivalent for their small community of the Nazi invasion of Poland, they come to a conclusion:

“We are the screwed ones.”

Colombia signed some peace accords in 2016 that demobilized thousands of FARC combatants, the most powerful guerrilla group in Latin America at the time. However, the conflict between armed groups continues in isolated parts of the country where the presence of the State is minimal. In this place, on the border between the Antioquia and Chocó regions, the Gaitanista self-defense groups, a criminal faction, and the ELN guerrillas fight for every inch of jungle. Territorial control means disposing of coca fields, extortion, and drug trafficking corridors. As financing armies is not cheap at all, the clash is brutal.

The confrontation between the two groups has left the roads strewn with mines, which have caused the death of 10 indigenous people in the last year, people who had nothing to do with each other, who were passing by. And of an undetermined number of combatants who, like the young man who lost his legs when he accidentally operated one, have been able to die. Or maybe not. The townspeople transported him to a secret place, where he got lost in the tropical foliage.

This trip to those more remote communities that have been isolated by artifacts and crossfire starts in Apartadó, in Urabá. The mechanical systems that transport bunches of bananas cross the fields like iron scars. As the truck adds kilometers the presence of the administrative state is diluted and the three letters of the self-defense groups, AGC. A toll booth appears in the middle of a stone and dirt road. A boy with a pulled cap who charges a dollar and a half to raise the barrier issues a receipt, in case visitors want to pass it on as an expense.

The sun and humidity give no respite. For decades this place was under the influence of the Farc, in continuous war with paramilitaries and the Colombian Army. Here some of their fiercest battles were fought and there were mass killings of civilians. It was a time when war was a way of life, not an exception. Abandoned and half-demolished villages pass through the window at full speed, invaded by vegetation and some ominous birds. Its inhabitants left, never to return. The demobilization of the Farc left a power vacuum that was filled by another active guerrilla, that of the ELN. It had exclusive access to businesses such as illegal mining and logging. The self-defense groups, made up of ex-paramilitaries dedicated to drug trafficking, have entered the scene to dispute the territory and little by little they have managed to displace them. The .

The road empties into a river of murky water. The place is called Riosucio. The population, mostly Afro, lives in wooden houses built on the banks of the river. From here the journey continues by boat. The letters AGC appear again written on facades, roofs and trees in the middle of nowhere. After four hours upriver Murindó appears, celebrating his festivities these days. The queens of beauty dance on the stern of steamboats that cruise through town to catchy music. Neighbors cheer them from the mainland. In the crowd it is not difficult to distinguish boys with empty eyes, their cap pulled up, a bandolier across their chests. Everyone knows who they are.

There, a Colombian Army sergeant — dark, stocky, hair by brush — walks out to meet the travelers:

“I need to know where they are going,” he asks. We want to know if they arrive complete.

Five hours by boat later, the river narrows and you have to cross some mangroves. The darkness can be seen inside the jungle, as if someone had turned off the light. Two young people cross aboard a boat packed with coca leaves. From the trees come the whistles of invisible people, indistinguishable behind the undergrowth. At the top of a hill appears Isla, a village of Emberas indigenous people.

Its 357 inhabitants live in confinement. They cannot go outside the limits of their territory. They wash clothes and dishes in a part of the river near their houses, they fish for sardines a little further on. To go further would be to expose yourself to being blown up. The small crops that they have inland, in a higher part of the sierra, have been abandoned. The animals that could hunt in this imaginary perimeter are rare. His own physical activity has suffered. Someone not used to walking through these places can complete about 15 kilometers in one day. They, women and men, about 50. Inactivity causes them anxiety. The horrors they have witnessed hammer their brains.

Nobody forgets Plinio Dogari, a 13-year-old boy. He was strong, capable of carrying heavy sacks and enduring long walks. Plinio premiered his facet as an adult. In a solemn ceremony he received the vest and the cane that accredited him as one more member of the indigenous guard, a kind of local policeman. Their adventure was short-lived. On February 28, he was crossing a fallow ground when he stepped on a mine. He lost his right leg instantly. The village mobilized to transfer him to a hospital, hours away. Plinio is recovering right now in Apartadó, a larger city where the hospital is close at hand. The stump, at the knee, has not yet fully healed, so a prosthesis cannot be placed. He has started going to school on crutches. “I wanted to be a footballer,” he says, pointing to where his foot should be.

The International Committee of the Red Cross (ICRC) estimates 263 victims of explosive devices in Colombia during 2021. 59% are civilians. 17 died after the explosion, the rest will live with physical and psychological consequences for the rest of their lives. The Austrian Bárbara Strasser, ICRC delegate, talks as a neutral entity with the armed groups to try to prevent harm to the civilian population.

It is often caught in the crossfire. “They threaten us,” laments Ubellina, a cook, fisherwoman and shaman of the community. “We have always lived in isolation, but now more, too much,” adds Ubadel, the doctor. One morning when the roosters began to crow, the noise of heavy weaponry startled them. The AGC, called by the Government the Gulf Clan, and the guerrillas fought a three-hour combat, between six and nine, on a mountain close to the town. The governor, the title that the mayor has here, saw to it that the 357 residents took shelter on a slope. On another occasion, a small contingent of paramilitaries spent the night at the school. In the morning the army woke them up with a ration of lead. The exchange lasted hours. The military liquidated one of the heads of the AGC. His body was transported on a stretcher that crossed the main square of Isla. No one has forgotten his petrified face, his open eyes. A helicopter waiting on the soccer field took the body into the air, like a trophy. The roof of the school was leaked, until today no one has repaired it. “They also killed the board (the blackboard),” warns a neighbor.

After eight hours of sailing here, in Turriquitado, the residents of the town who had to flee after accidentally provoking the ire of paramilitaries and guerrillas at the same time are adapting to their new environment. A man in a neighborhood assembly has something to ask Strasser of the ICRC:

“The old men are tired.” They fear that other men with weapons will come and tell us that we have to go. Can you assure us that this will not happen?

“We cannot replace the state,” she answers sincerely. I cannot assure you that that cannot happen again, but we can knock on doors and support them. We are not going to leave you alone.

Its borders are riddled with mines. Alirio is the best hunter. A few months ago, his dog, the Orejón, went into the jungle behind something that activated his instinct. Alirio sensed that it was prey. He went home for the shotgun. When he returned, he found the Orejón dead. The teeth on its back looked like those of a jaguar. She ran after his trail, imagining him close. He found him perched on a tree, from where he shot him down. He returned with the death penalty of the Orejón, but with the satisfaction of having hunted a larger game. “That happens once in a lifetime.” He carried the jaguar on a stick, which he tied by the legs. A local television station sent a team of reporters by helicopter after learning of the feat. Alirio keeps her sharp teeth as a memento of the moment. Although since then he can hardly go far to hunt, the jungle looks threatening before his eyes: “The mines are scarier than the jaguar.”