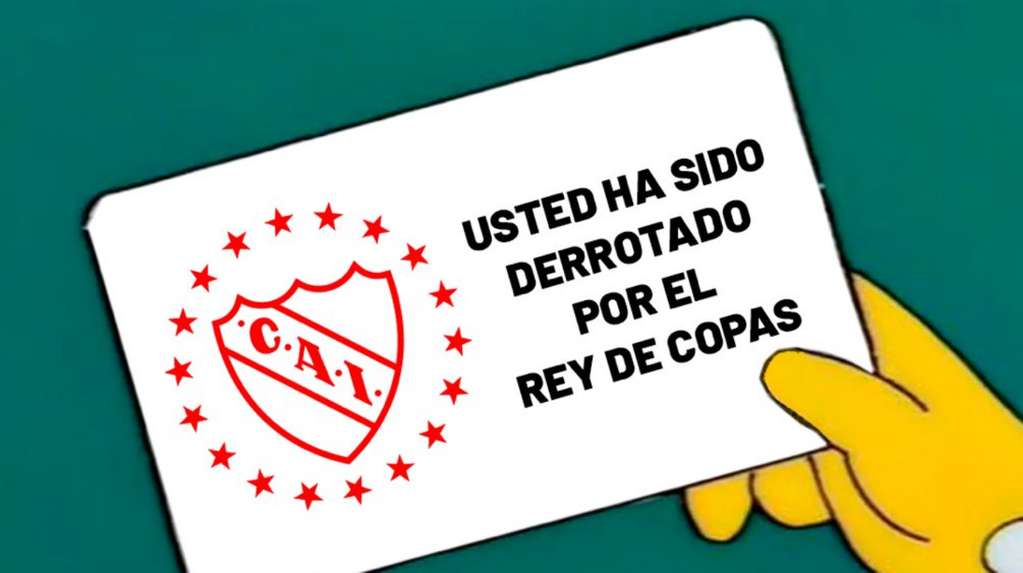 Independiente won the classic against Boca on the court and He continued to celebrate on his social networks. Shortly after the game ended at the Libertadores de América stadium, a message was published with a credential that read: “You have been defeated by the King of Cups”.

Had the Xeneize the opportunity to catch up with Independiente and even to surpass him, but he lost the finals he played in 2012 with Corinthians and in 2018 with River in Madrid.

“You have been defeated by the King of Cups,” reads the card that was posted as an image, while the accompanying comment adds: “And it will be called forever Independent”.

The Boca players left Avellaneda directly to the Intercontinental hotel because, according to what the coach of the Xeneize, Sebastián Battaglia, in Independiente they cut off the water and could not bathe in the local club’s changing rooms.

“When they come to Boca we would have to do the same to them”, Battaglia threatened, after a night of sheer nervousness to Boca.

Battaglia denounced that Independiente cut off Boca’s water in the dressing room.

Battaglia: “I am more concerned about the reactions of some players than the result”

Boca Juniors coach Sebastián Battaglia confessed that he left Avellaneda “More concerned about the reaction of certain players when they were replaced than by the defeat against Independiente ”.

“Certain reactions worried me more than the result itself,” Battaglia confided. after the manifest annoyed reactions exhibited by Agustín Almendra and Cristian Pavón, who got upset when they were replaced, while Carlos Izquierdoz was expelled for attacking Andrés Roa without a ball.

Read also: Tension in Boca: Zambrano reacted against Pavón in the substitute bench and almost finished the pineapples

“With the game I’m not so worried because Independiente scored the goal in the first half and not much more,” remarked the Boca coach.

“And refering to the changes numerous (seven) that we did with respect to the previous match with Sarmiento, obeyed the idea of ​​giving football to all the members of the squad “, he justified.

With its 1-0 victory against Boca, Independiente rose to the dream of reaching a place in the Copa Libertadores next year from the imminent title that River Plate can achieve tonight, something that the Xeneizes paradoxically taking advantage of the conquest of his most classic rival.

The imminence of the River Plate title, which can take place tonight at the Monumental against Racing, caused their classic rivals to come out to play last night in Avellaneda, on the 22nd. date of the professional League, with his mind set only on international cups, although with the exception that the Red You can travel to them only by this route of the Professional League while Boca also has that of the Argentine Cup.

This final that Boca will play on December 8 from 9:10 p.m. Before Talleres, from Córdoba, or Godoy Cruz, from Mendoza, in the Unico-Madre de Cities stadium, in Santiago del Estero, he had Sebastián Battaglia film all the members of the squad Xeneize.