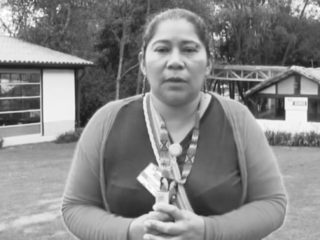 This Wednesday morning the murder of Argenis Yatacué and her husband Marcelino Yatacué Ipia was known, according to the complaint carried out by the Fabric for the Defense of Life and Human Rights. The woman was teacher and indigenous authority from the Páez de Corinto reservation, in the Colombian department of Cauca.

The couple was attacked and killed by armed men at the entrance to the northern part of Corinto. Later, members of the Indigenous Guard arrived at the crime scene to initiate the investigation leading to the location of the perpetrators.

Next to the lifeless bodies a sign was found that read: “For the death of Cortico, ELN”, implying that the double murder was a reprisal after the death of an alleged member of the National Liberation Army (ELN) guerrilla, according to they report Colombian media.

1/2 “Our rejection, pain and rejection of the double murder in Corinto, Cauca, of Professor Sa’t We’sx, ancestral authority of the Páez de Corinto reservation Argenis Yatacué, and her partner, Marcelino Yatacué Ipia, who resided in the Media Naranja village “, Defensor Camargo. pic.twitter.com/Q2JTveqIyq

The north of Cauca is one of the most militarized areas of the country, and in fact, the Ombudsman’s Office had already warned since 2018 about the risk situation that existed in the area, with the presence of ELN structures, dissident groups from the FARC and the EPL (Popular Liberation Army), among others. .

Through a release, the Ombudsman’s Office “deeply” regretted the events and stated that Argenis “was a staunch defender of the rights of children and adolescents, for whom she raised her voice against the forced recruitment“Likewise, the body demanded” speed and justice for her, her partner and all the victims of the violence. “

Between 2019 and 2020, six women with political leadership were assassinated in Cauca and four of them were indigenous. It is estimated that this year in Colombia, until the end of May, 67 social leaders have lost their lives violently, and a total of 1,185 since the signing of the Peace Accords in 2016, according to the Institute of Studies for Development and Peace (INDEPAZ).