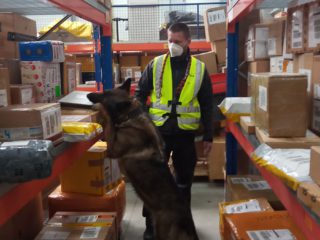 Unlicensed online pharmacies and their logistics were targeted by authorities and the military from 92 countries in May. Operation Pangea XIV ran from May 18-25 under the coordination of Interpol. Numerous websites were closed, links deleted, 710,000 shipping packages examined and extensive items confiscated. 227 people were arrested.

Interpol published this information on Tuesday. The official action week has taken place annually since 2008. But never before had so many websites and links been taken offlinesays Interpol. This could have something to do with the fact that providers of unlicensed or counterfeit drugs have become increasingly active online in the wake of the coronavirus pandemic. Among those arrested was a Venezuelan who is said to have set up a drug shop in the Facebook application WhatsApp.

Fittingly, more than half of all seized medical goods were unapproved, unlicensed, or fake COVID-19 tests. Half a million counterfeit surgical masks were picked up in Italy, including 35 machines for manufacturing and packaging such masks. Among the “drugs” withdrawn from the market were the entire spectrum from cancer drugs to potency pills, from steroids to vitamins, from malaria drugs to pain relievers.

“Unapproved or counterfeit medicines can be dangerous for a number of reasons,” warns Interpol. “They could contain the wrong amount of active ingredients (too little, too much, or nothing at all), have incorrect expiration dates, or have been poorly stored. that they may be ineffective or contaminated. ” Europol and the customs department of the United Nations Office on Drugs and Crime (UNODC) based in Vienna were also involved in Operation Pangea XIV.