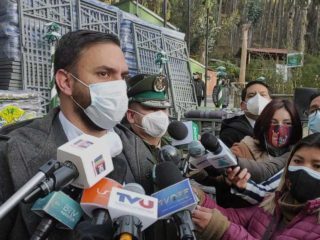 The Bolivian Government Minister, Eduardo del Castillo, reported this Thursday that the alleged shipment of tear gas and high-caliber ammunition from Ecuador, during the Lenín Moreno government (2017-2021), to the de facto administration of Jeanine Áñez (2019-2020).

At a press conference, Del Castillo indicated that they had already had information about the transfer of tear gas from Ecuadorian territory to the Áñez regime, as a loan.

“However, we have unofficial information that they had also provided high-caliber ammunition, we are talking about war ammunition“said the official from the facilities of the Integral Police Station of Pura Pura, in La Paz.

In this regard, Del Castillo said that they will inquire about whether Ecuador’s legal regulations “allowed Lenín Moreno to take out weapons of war to send them to other countries.”

“It is under investigation, and in the next few hours we will communicate to the Bolivian people about all the endowment that Ecuador would have delivered to Bolivia“, ad.

The commander of the Police, Jhonny Aguilera, said, for his part, that this information is derived from the statements made by several former officials of the de facto regime of Áñez, within the so-called “Tear Gases” case, in which the alleged acquisition of these items with a premium during that administration.

According to Aguilera, on December 4, 2019, less than a month after Áñez was installed in power, there were diplomatic efforts for Ecuador to provide non-lethal weapons and ammunition to Bolivia; items that would have been shipped later on a flight.

The Áñez administration faced strong protests after the coup in November of that year. During his de facto mandate, which lasted until November 2020, there were at least four massacres: those in Senkata, Sacaba, Montero and the South Zone of La Paz.

According to the Bolivian Ombudsman, Nadia Cruz, during the Áñez government and under his orders “37 people died in police and military interventions.”