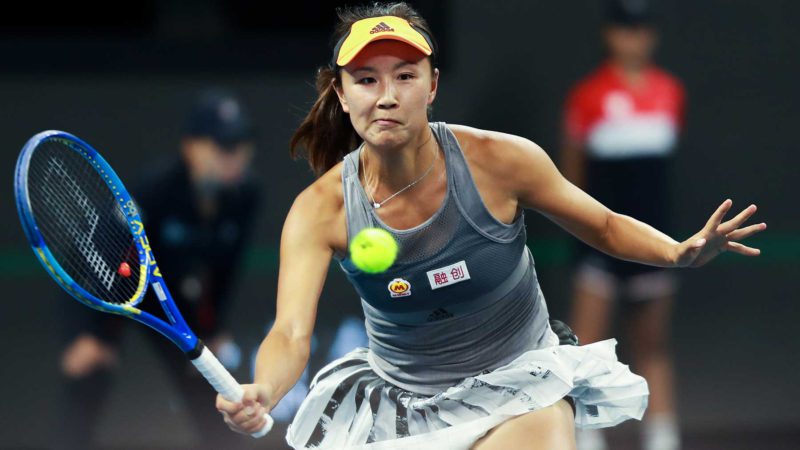 The International Olympic Committee affirms that Chinese tennis player Shuai Peng, who has disappeared since she reported a sexual assault by a Chinese politician, “seems to be fine and safe” after a new video call with the athlete on Wednesday. The organism defends that its action is being of “silent diplomacy”, after having received some criticism when observing certain passivity. On the other hand, the WTA has decided to cancel all its tournaments in China, a decision that will mean significant losses but that has been widely applauded in the tennis world.

Through a statement, the International Olympic Committee wanted to reiterate its support for Shuai Peng. The highest body of world Olympism claimed to have had another interview on Wednesday with the Chinese tennis player in which they showed their “broad support” and announced a meeting in person in January.

“We share the same concern as many other individuals and organizations for the well-being and safety of Peng Shuai. That is why, yesterday, an IOC team made another video call with her. We have offered her our extensive support, we will keep in regular contact with her and we have already arranged a personal meeting in January, “read the IOC statement.

This body had received some criticism for its passivity in the Peng case, for example from Martina Navratilova. “Until now, I can barely hear you,” said the former tennis player. In the latest statement, the IOC explained that they are proceeding with a “very human and person-centered approach” to deal with the situation of the athlete.

“Since he has played in the Olympics three times, the IOC is addressing these concerns directly with Chinese sports organizations. We are using ‘silent diplomacy’ which, given the circumstances and based on the experience of governments and other organizations, is the most promising way to act effectively on these humanitarian issues, “they added.

There will be no WTA tournaments in China

The Women’s Tennis Association (WTA) announced through its president Steve Simons the “immediate suspension” of all tournaments in China, including Hong Kong, amid concerns for the welfare of Shuai Peng, after she denounced a sexual assault by a politician from the Asian country. A measure that has been highly applauded in the tennis world by figures such as Novak Djokovic, Andy Roddick, Billie Jean King or Martina Navratilova, among others.

The WTA He did not want to sit idly by after everything that happened with Shuai Peng and they have made the decision to cancel all the tournaments scheduled to take place in China. It was announced this Wednesday by its president, Steve Simons, who stated that they continued to have “many doubts as to whether she is free, if she is safe and not subject to censorship or intimidation,” in addition to demanding a “transparent and uncensored investigation into Peng’s accusation. on sexual abuse ”.

«With the full support of the WTA Board of Directors, I am announcing the immediate suspension of all WTA tournaments in China, including Hong Kong.»

Such a situation has led them to an unprecedented measure, to suspend all tournaments that were to be played in China, a country that hosted a good number of tournaments on the women’s circuit. “I announce the immediate suspension of all WTA tournaments in China, including those held in Hong Kong. In conscience, I do not know how I can ask tennis players to play these matches when Peng Shuai is not allowed to communicate freely and, apparently, is being dissuaded into contradicting her accusation of sexual abuse, “read the statement published by Simons.

The WTA has shown even greater support for Shuai Peng, as such cancellation of tournaments will mean losses of hundreds of millions of euros. Simons’ position is clear: if the Chinese government does not “transparently” investigate the reported events, there will be no women’s tennis in the country. “The Chinese government has left no other option to the WTA. I hope that our requests will be heard, ”Simons said.

One of the first voices to assess the WTA’s decision to cancel its tournaments in China was Novak Djokovic, number one in the ATP. “It is a very brave decision for the WTA. Your health is of the utmost importance to the world of tennis, ”said the Serbian. “It is not necessarily about her, it could be anyone, a player or a female player, but something like this should not happen,” added Djokovic, after achieving the move from Serbia to the semifinal of the Davis Cup in Madrid.

Also, the legend of women’s tennis Billie Jean King, winner of 12 Grand Slams, said that the WTA “was on the right side of history.” Another of those who applauded the decision was former American tennis player Andy Roddick, who stressed that despite the losses that this will cause, they have decided to cancel the tournaments. “Acting well is much easier when it costs nothing. Respect, “said the Gunner of Nebraska.