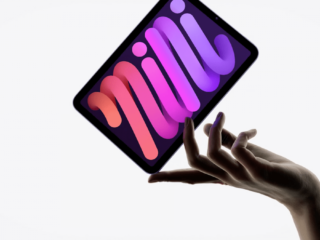 Apple has completely redesigned the compact iPad mini: Like the bigger brothers Pro and Air, the sixth generation of the mini tablet uses a full-surface and larger display, now with a diagonal of 8.3 inches. At the same time, this displaces the home button from the front, and gestures take over its functions.

Like the iPad Air, the fingerprint scanner (Touch ID) moves into the side button, as Apple explained at an event on Tuesday evening. USB-C is replacing the Lightning connector and is supposed to enable faster data connections.

Apple equips the iPad mini with the current A15 bionic chip with a six-core processor, which is also expected in the iPhone 13. The ultra-wide-angle front camera supports Apple’s center stage mode in order to follow the user in front of the.

It is now compatible with the Apple Pencil 2, which is magnetically charged on the side. The iPad mini 6 with 64 GB of storage space will soon be available in Germany from just under 550 euros. The version with cellular support now supports 5G networks and is available from 720 euros.

iPad 9 with a faster chip

Apple is also updating its entry-level iPad: the ninth iPad generation is equipped with Apple’s A13 chip, the manufacturer promises a performance increase of up to 20 percent compared to the A12 in the iPad 8. An improved front camera now supports Apple’s center-stage technology that automatically adjusts the image section and thus keeps an eye on the speaker during video conferences. It should now come in the trade with 64 GB of storage space from just under 330 US dollars.

Message will be updated further.