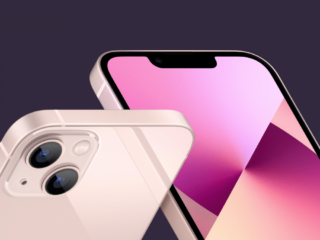 Apple has announced its flagship smartphones in 2021: The iPhone 13 retains the case design of the popular iPhone 12, only the noticeable recess for sensors at the top of the screen (often called “notch”) will be slightly smaller – by 20 percent, like the manufacturer said at an event on Tuesday evening (see also Mac & i-Liveticker).

The iPhone 13 is offered in five colors.

According to the manufacturer, the screens of the Pro models achieve up to 1000 nits in sunlight (1200 nits for HDR content). With Apple’s “ProMotion”, the iPhone Pro displays support for the first time a refresh rate that can be dynamically adjusted by the operating system and that, depending on the content, goes up to 120 Hertz – previously it was 60 Hertz. If necessary, this ensures smoother transitions and animations, with static content the rate can be reduced down to 10 Hertz in order to save electricity. Speculations about an always-on display have not come true.

Apple’s A15 bionic chip, like the A14, uses six cores, two cores are still designed for high-performance tasks, four efficiency cores for energy-saving tasks. Apple did not mention a speed comparison with the A14. The A15 chip is up to 50 percent faster than the competition, according to the manufacturer. The A15 chip in the Pro models has a 5-core GPU, while the 13 and 13 mini have a 4-core GPU.

The rear camera system of the iPhone 13 mini and iPhone 13 continues to use two lenses, which are now arranged diagonally. A larger 12-megapixel sensor should absorb more light, the wide-angle lens still has an aperture of f / 1.6, the ultra-wide-angle an aperture of f / 2.4. Apple is now using sensor shift image stabilization, in which the entire sensor instead of the lens is moved for stabilization. This was previously reserved for the camera sensor of the expensive iPhone 12 Pro Max.

Three cameras also adorn the back of the iPhone 13 Pro.

“Photographic styles” allow users to specify settings for filters that are automatically applied to areas of the image instead of the entire image. This would not affect skin tones, for example, according to Apple.

A new “cinema mode” allows the focus to be changed during video recordings – even afterwards. In this way, a certain image plane can be represented sharply against a blurred background and should create depth in this way, which is otherwise only possible with large lenses. Both features come on the non-Pro models as well.

On the Pro models, Apple also wants to introduce the ProRes codec, which is intended for post-production with the Final Cut Pro video editing application – it is to follow an update at a later date.

The iPhone 13 should last significantly longer with a larger battery than the 2020 models: Apple promises a 1.5 hour longer run time for the iPhone 13 mini and iPhone 13 Pro, while the iPhone 13 and 13 Pro Max should even be 2.5 hours longer run on a single charge than their direct predecessors.

The iPhone 13 Pro and 13 Pro Max are available in graphite, gold, silver and sierra blue. In addition to 128, 256 and 512 GB, there is also 1 TB of storage space as a particularly expensive option for the first time. The price of the iPhone 13 Pro starts as before at 1150 euros, the Max model is traded from 1250 euros. The 1 TB version of the Pro Max is available from Apple for just under 1830 euros.