Iran failed to send a special satellite in mid-June, says US 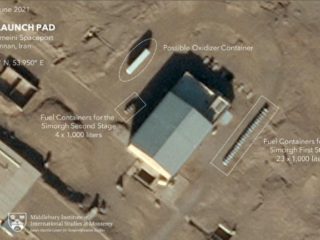 Iran tried unsuccessfully to send a satellite into space in the middle of the month and appears to want to make a new launch, according to the Pentagon and images of an Iranian space station released on Wednesday.

“The US space command became aware of the failure of an Iranian rocket launch around June 12,” Lt. Col. Uriah Orland, a Pentagon spokesman, said in a statement.

He recalled that the last Iranian launch occurred in April 2020, when Tehran put into orbit the microsatellite Nour-1 that the US military is monitoring.

“Our constant observations of that object show that it is out of control and inoperative.” added.

According to CNN, which cites experts from the Californian University of Middlesbury, in recent days activity increased at the Iranian space center in Semman, 300 km from Tehran, which would indicate that another launch is being prepared.

Images of the Planet Labs society dated June 19 and 20 show fuel tanks, transport vehicles and a mobile platform in that space center

“This morning I saw information that they were launched ten days ago” a, he added.