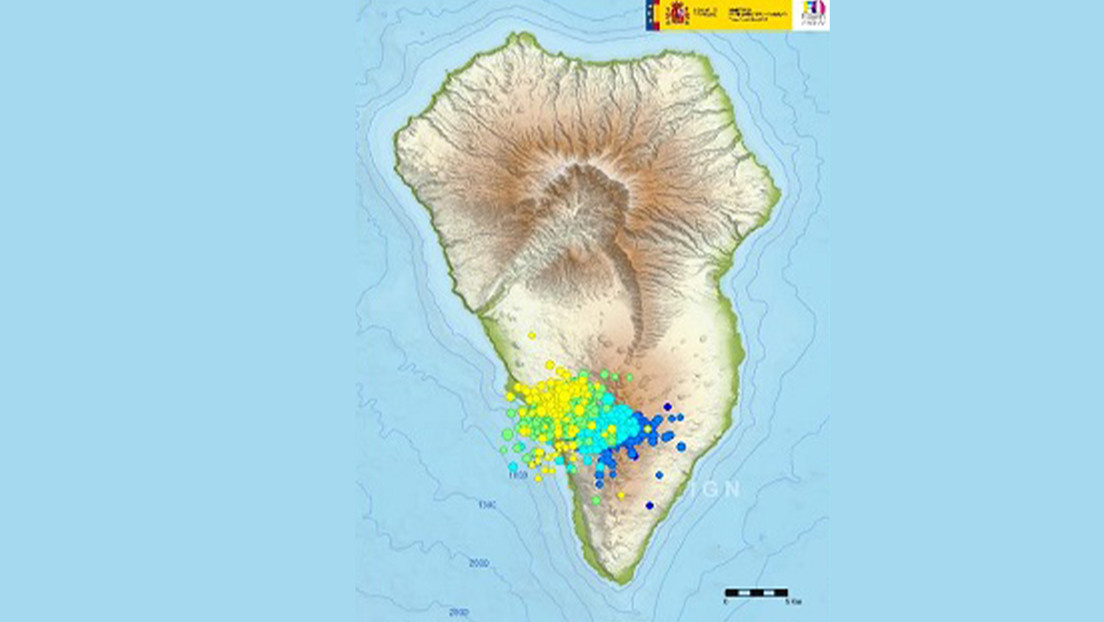 Is a volcanic eruption approaching in the Canary Islands? What is known about the seismic swarm that has caused more than 4,000 earthquakes

Since last Saturday the island of La Palma, in the archipelago of the Canaries (Spain), has registered 4,222 earthquakes, according to the latest upgrade of data from the National Geographic Institute (IGN).

Most of the movements have not been perceived by the population, but in the last day there have been some of greater intensity with an epicenter closer to the surface. According to experts, magma is making its way through the earth’s crust and could lead to an eruption of the Cumbre Vieja volcano, which includes several cones and craters.

The entire Canary archipelago is of volcanic origin and the eruptions on all its islands have been a constant in its geological history. The last major episode took place in 2011, when an underwater eruption occurred on the neighboring island of Hierro.

Volcanic activity #LaPalma#vigilancialapalma In the last hours the seismicity persists although it has reduced its magnitude somewhat. However, we must remain vigilant for any changes. @IGNSpain@CabLaPalma@Marianohzapata@112canariaspic.twitter.com/x2V4JW7gGu

However, to find a similar event on the island of La Palma you have to go back much further, exactly half a century. In october 1971 the Teneguía –One of the cones of the Cumbre Vieja volcano–, barely 439 meters high, ejected wash for three weeks. The tremors began just six days before the eruption, which is considered the shortest to have occurred in the Canary Islands.

Since then, the volcanic building has been dormant until 2017, when seismic activity began to be detected that has been increasing, triggering alarms during the last week. Now the activity is registered again in the Cumbre Vieja environment.

What is a seismic swarm?

A seismic swarm is considered to occur when a large number of earthquakes or seismic movements are concentrated in space and time.

In the case of La Palma, more than 4,000 earthquakes have been registered in less than five days, since the early hours of Saturday, September 11, in the southern part of the island. This Wednesday, 20 earthquakes were located at depths of between 1 and 3 kilometers, while the largest event, 2.9, occurred at a depth of only 0.4 kilometers. However, most of the activity is concentrated at depths of between 7 and 9 kilometers.

11 million cubic meters of magma have already been injected into the interior of Cumbre Vieja. The figure shows the horizontal and vertical displacement in some of the GNSS stations that are part of the Canary Islands Geodetic Network ➡️ https://t.co/iIOLWRKCmDpic.twitter.com/yXG5bAKcGJ

According to IGN experts, seismic activity continues to migrate slightly to the northwest, at depths of around 8 kilometers.

Why is it produced?

The origin of the seismic swarm that is taking place on the Spanish island is a magmatic intrusion. The magma inside the earth is moving and is penetrating the consolidated earth’s crust.

This movement is also leaving signs abroad. Thus, the affected area in the south of La Palma is gaining height. It is estimated that the maximum accumulated vertical deformation is around the 6 centimeters with a distribution compatible with a center of pressure in that area.

The Canary Islands Geodesic Network, operated by the Canary Islands Volcanological Institute (INVOLCAN), has calculated that inside Cumbre Vieja, the area where most of the earthquakes of the present swarm are being located, have already been injected 11 million cubic meters of magma.

Involcán interprets this deformation pattern as the effect of the pressurization of a small magmatic reservoir, located inside Cumbre Vieja at a depth of approximately 6-7 kilometers.

Will there be an eruption?

What is known is that most seismic swarms do not end in a volcanic eruption. While it is true that the area now affected houses the most active volcanic building of the Canary Islands and if an eruption were to occur, that would be where it would occur.

On Tuesday, the island’s authorities raised the alert to yellow, the first of the three levels that this traffic light consists of. The residents of four affected municipalities are asked to be alert: Fuencaliente, Los Llanos de Aridane, El Paso and Mazo.

The mayor of the town hall of La Palma, Mariano Hernández Zapata, after the meeting with the Scientific Committee to assess the evolution of the seismic movements in recent days, reported this Wednesday that the yellow traffic light will be maintained. “The intensity has been growing and rapid evolution may occur in the short term, although there are no elements that make us have 100% that certainty “, reported throught social media.

Hernández affirmed that it is “expected” that “felt earthquakes of greater intensity” will occur and called for “maximum attention to all neighbors”, as well as “maximum collaboration”, in addition to requesting that they be informed through official means in case the alert is modified or the authorities must send a message to the population.