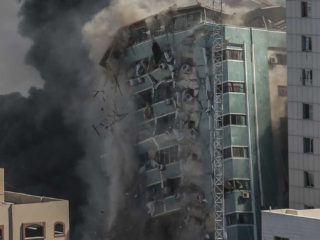 The Israeli Army has assured this Tuesday that the Islamic Resistance Movement (Hamas) It operated from the Al Yalá tower, which housed international media headquarters and which was demolished in an Israeli bombardment, in an attempt to affect the operations of the anti-aircraft system ‘Iron Dome’.

The Israel Defense Forces have stressed that the building, demolished during the ‘Guardians of the Walls’ operation, “was used by the terrorist organization Hamas for intelligence operations “, including electronic interception operations “against the operational activities of the Army and civil systems in Israel.”

“One of the main goals of these efforts was to develop a system that will alter the anti-aircraft defense system ‘Iron Dome’ », he pointed out, before noting that the objective of the bombardment was “to limit these enemy capabilities, including the destruction of special equipment.”

In this sense, he stated that “the equipment I was in the building at the time of the bombing » and added that it “was designed to demolish the building to ensure the destruction of these special media.”

«The objective was to high military value for Hamas and it was approved according to the rigorous procedures in the Army, in addition to being in line with International Law, “he argued, after international criticism against the destruction of the offices of numerous media, including the US agency Associated Press and the television network Qatari Al Jazeera.

He also stressed that “in view of the nature of the target, before the bombing the Army gave the civilians in the building advance notice.” “They took place significant efforts to allow civilians to evacuate the building“, He said, while highlighting that the process was” meticulous. “

«This event must be put in context. Hamas intentionally operates among the civilian population of Gaza to impede the operational activities of the Army. The Army will continue to maintain the security of Israeli citizens, while doing everything possible to prevent harm to non-combatants, “he added.

For his part, Israel’s ambassador to the United States, Gilad Erdan, met Tuesday with representatives of the Associated Press in New York “to explain to executives that the building that housed their operations in Gaza was being used by Hamas terrorists who they were trying to affect the ‘Iron Dome’ ”.

“That is why it was a priority of the Army during last month’s operations,” he highlighted through his Twitter account, referring to the eleven days of clashes in the Gaza Strip, which resulted in the death of more than 250 people in the Palestinian enclave and twelve in Israel.

Erdan, who has stated that “the AP is one of the most important news agencies in the world,” added that “Israel does not suspect that its employees were aware that a covert Hamas unit was using the building in this way.”

“Israel did everything possible to ensure that employees or civilians were not harmed during this operation. On the contrary, Hamas is a genocidal terrorist organization that purposely places its terrorist machinery in civilian areas, including buildings used by international means, ”he argued.

Finally, Erdan stressed that “Israel attaches the highest importance to freedom of the press and fights to guarantee the safety of journalists wherever they are reporting.” “Israel is ready to help AP in rebuilding its offices and operations in Gaza,” he added.

The owner of the Al Yalá tower, Yauad Mehdi, filed a complaint with the International Criminal Court (ICC) at the end of May for the attack, which he described as “a war crime”, as revealed by his lawyer, Gilles Devers, who pointed out that Israel could not justify the presence of military objectives in the place.

“We hear many times that this tower was destroyed because there was a team or an armed resistance group. This is something we totally deny after studying the case, “Devers explained. “International Law establishes that civil property can only be damaged if it is used for military purposes, and that was not the case,” he concluded.