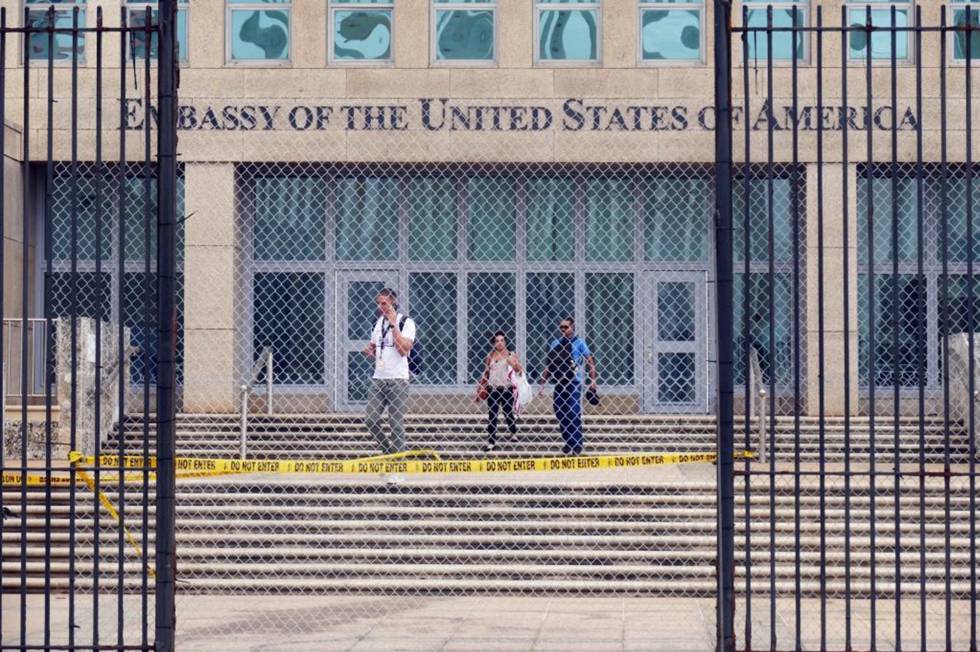 “It was terrifying, the room was spinning.” The Havana syndrome, the mysterious ailment that attacks US spies and diplomats | International

For the seasoned agent Marc Polymeropoulos, this trip to Moscow was, in principle, a rather trivial thing. He had been in the CIA for 26 years, his back was hardened in the Middle East and Afghanistan, he had been shot more than once. In December 2017, as the recent commander of the agency’s clandestine operations in Europe and Russia, he was visiting the capital of the old enemy of the Cold War, but with open eyes, in order to meet with his Russian counterparts and get to know the place better. , knowing that they are being watched at all times.

The third night he went out to dinner with colleagues and remembers that he did not drink much. It is first class spy that in hostile territory you should not get drunk, or let yourself get drunk, much less believe that you have hooked up with a stranger. He arrived at the Marriott hotel near the American Embassy, ​​where he was staying, and went to bed early. Before long, an attack of vertigo like he had never felt brought him out of sleep suddenly, a stabbing pain shot through his head and his ears pounded from a noise.

“I have been in very difficult situations in my life, but that was terrifying, I had lost control, the room was spinning without stopping, I knew something bad was happening. When I returned to the United States, I could barely work two hours a day, I couldn’t drive, and I forgot things all the time. Even today I continue to suffer continuous headaches, ”Polymeropoulos explains to this newspaper from his home near Washington. In the summer of 2019, at age 50, he retired.

His is one of about 200 cases of US diplomats, intelligence agents and their families who have suffered a mysterious ailment whose origin is unknown and for which there is still no answer, which the US authorities suspect may constitute a microwave attack. by adversary countries and has left dozens of people with neurological damage.

It is known as “Havana Syndrome” because the first incidents were known on the island at the end of 2016, but since then they have been spreading through Austria, Colombia, Russia, Australia, China, Uzbekistan. This August the vice president, Kamala Harris, delayed a trip to Vietnam because they suspected of new cases in Hanoi. In early October, German police confirmed that they were investigating alleged sonic attacks on staff at the US Embassy in Berlin. And Congress has just passed, with the support of Democrats and Republicans, a law to financially support the victims of the unidentified health incident, some of whom have not been able to return to work.

When John Bolton, Security Advisor to the Donald Trump Government, arrived at the White House in April 2018, he had just received news of the first people affected outside of Cuba, specifically, in China, and that made him convince himself that this, Whatever it was, it was not a psychosomatic phenomenon, nor was it a coincidence. “One possibility was that it was some kind of energy weapon, we saw it quite possible that it came from Russia, we knew that during the Cold War the Russians had already tried to saturate the communications of the US embassy directing energy there. It could also be China, but it seemed stupid to me that Beijing did it in its own territory, “Bolton explains to MRT. “The danger of this is not just for American diplomats, but for the whole world, and it should be taken more seriously around the world,” he adds.

It began with all the intrigue of a spy movie in the setting most conducive to suspicion: the new US diplomatic legation in Havana, reopened in 2015 in a historic step in the thaw between the US and Cuba. At the end of 2016, several employees of the State Department and the CIA, as well as some of their prominent relatives on the island, had begun to suffer strange episodes, which they describe as pressure on the head, headaches and an intense sound of cicadas. . Medical tests revealed damage to the brain tissue of some of those affected. The Donald Trump government decided to evacuate all non-essential personnel and the authorities began to investigate what, at that time, they suspected was a “sonic attack”, but this hypothesis was ruled out.

Some scientists also pointed to the possibility of a collective psychogenic illness, that a group of people in a situation of stress – Cuba was – manifested the same symptoms by suggestion. Two experts, Robert W. Baloh and Robert E. Bartholomew, published a book pointing out this hypothesis: El Havana syndrome: massive psychogenic illnesses and the true story behind the mystery and hysteria at the embassy.

The passage of time and the proliferation of cases in different parts of the globe is winning the battle over the skeptics. One of the last officials to suffer from the symptoms is a CIA agent who was traveling to India with the agency’s director himself, William Burns. In December 2020, a report by the National Academy of Sciences, Engineering and Medicine concluded that the most plausible hypothesis consisted in the directed delivery of radio frequency energy and, in this case, the Government considers Russia one of the great suspects. . The target might not even be individuals, but US facilities and their computer systems, and that these attacks end up taking their toll on the people located there.

Thomas Shannon, undersecretary of state with the administrations of Barack Obama and Donald Trump, retired in 2018, does not doubt that these are aggressions: “One thing is clear: they are attacks. That has to be understood, although we do not know exactly what they consist of, they are undoubtedly intentional “, informs Íker Seisdedos.

It is also the hypothesis that many legislators see most plausible in Washington. Neither scientists nor authorities, however, can formally rule out other theories. Since the beginning of this year, the CIA has set up a specific task force to find the cause of these intriguing health incidents and has put one of the agents who worked in the search for Osama Bin Laden at the head of the team.

Officially, for logical reasons, the State Department says very little about the number of those affected, the security measures in place and the progress of the investigations. A spokesperson points out that the different public agencies involved are “working to try to identify whether these incidents can be attributed to a foreign entity and are focused on giving support to those affected.”

Mark S. Zaid, a lawyer representing several victims, is upset that the “Havana syndrome” is still being talked about. “It is a name that blames the Cubans and no one that I know suspects them, in addition to the fact that it is not a type of attack that began in 2016, it is a type of attack that dates back to the 1960s,” he points out. Among his clients, he points out, “there are some who are fine, whatever they suffered, they have recovered.” Others, on the other hand, “suffer daily agony, migraines, nausea, vertigo.”

Upon returning to the United States, Marc Polymeropoulos was treated at the Walter Reed military hospital, where the CIA sent most of its agents affected by this syndrome. He ended up retiring from the service and concentrated his strength on writing, something he defines as a “catharsis”, and this summer he published a book, Clarity in the crisis. Leadership lessons from the CIA. “Once you find out who is behind this, President Biden faces a difficult situation, because if there is an adversary attacking American officials, sanctions and expelling diplomats will not suffice, you need a very strong response, but you cannot start. a third world war ”.