Home
News
Italo Ferreira: he surfed on styrofoam tops, jumped into the sea with his jeans on and is the first champion of the Olympic waves

Italo Ferreira: he surfed on styrofoam tops, jumped into the sea with his jeans on and is the first champion of the Olympic waves 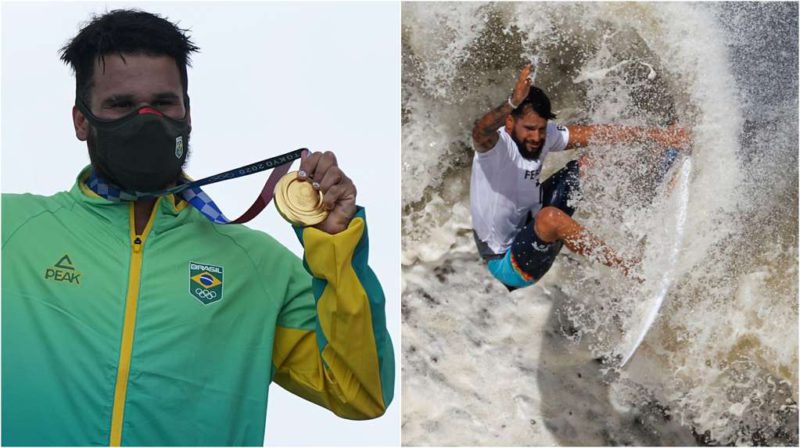 The roots of Italo Ferreira, the first Olympic surfing champion, in Tokyo 2020, they are in a small coastal town in the impoverished northeast of Brazil: Baía Formosa. There he began to ride the waves with the lids of the styrofoam boxes where his father kept the fish he sold later.

// What happened to Simone Biles: impact by the desertion of the great figure of the Olympic Games in full competition

Born in 1994, Ferreira comes from a humble family. His father was a fisherman and a mother employed in an inn, his passion for surfing erupted when he was still a child.

It started as a diversion, a way to pass the time while his father roamed the area’s beaches to sell what he had caught. Ferreira grabbed the lids of the expanded polystyrene boxes where the fish was kept fresh and was thrown into the sea.

Because he was small and thin, he managed to surf on the styrofoam top. The problem was when a wave broke the makeshift board.

“My father would get angry because he didn’t have a way to freeze the fish afterwards. There he would grab a churrasco skewer (a kind of brochette pin) that was on the beach, put it from one side to the other and put the styrofoam together so that he could continue using it, “he recalled in an interview on the portal UOL.

On other occasions he also borrowed the surfboard from his cousins, until his family painstakingly mustered the resources to buy one for him. Because the beginnings of the world champion in 2019 and brand new gold in Tokyo 2020, in the debut of the category in an Olympic event, were not easy.

He and his family tried a more comfortable life in Natal, the regional capital of the state of Rio Grande do Norte, but after two years they had to return to Baía Formosa, where they settled in his grandmother’s house.

From there he began to spend more time surfing. I was coming back from school and training. Little by little he began to stand out in the local tournaments that were held in the region. He was already prepared to make the jump to the most important championships, but the economic barrier prevented him.

No godparents, no sponsors, Ferreira asked for money in markets and inns to be able to travel and register for higher level tournaments.

In the midst of this chimera, Luiz ‘Pinga’ Campos, the great Brazilian surfing scout, crossed his path, who opened the doors for him to dedicate himself professionally to this sport.

“I went surfing very early. I got to the beach, got out of the car and saw a baby doing a 360 in the air. And then another. The competition started two days later and I asked people who that boy was. ‘It’s called Italo,’ ”Campos said in an interview with the World Surf League.

The effort was worth it and the results began to arrive. At 13 he made his first international trip. With an aggressive style and enormous creativity in his stunts, Ferreira also turned surfing into the best way to help his family financially.

“The first thing I did when I started winning jackpots was buy a house so we could live and say it was ours,” he told UOL.

The Olympic champion now intends to transform that property into the headquarters of the Italo Ferreira Institute, whose mission will be to help the children of Baía Formosa with few resources.

In 2011 he achieved his first two victories in the junior world championship and with only 20 years he qualified for the World Championship Tour of the World Surf League, that is, he had reached the elite of world surfing.

In his first participation he finished in seventh position, although he already showed his full potential by being chosen the best rookie of that edition.

In 2018 the first triumphs arrived and a year later he touched the sky when he was proclaimed world champion in the World Surfing Games and later in the World Surf League, where he beat his compatriot Gabriel Medina, fourth in Tokyo, in the last test.

Now, at 27, he reached Olympic glory, the first to do it in the surf category, on Tsurigasaki beach.

“I trained a lot, for months. Now my name is written in the history of surfing ”, said an excited Ferreira after winning gold, the first for Brazil in these Olympic Games in Tokyo.

The life of Italo Ferreira seems like a movie case. The ending, with the gold medal at the Olympics, is the happy part of the story. But without a doubt, this story has many incredible stretches.

The current champion It was not easy for him until he reached Tokyo. He managed to qualify for the world event after overcoming an authentic Odyssey with a stolen passport, a typhoon, jeans and a borrowed board.

In 2019, while training in the U.S. his car window was smashed and some of his belongings were stolen, including his passport and visa to enter Japan. He quickly tried to get an appointment to get a new passport and visa … in a ‘foreign’ country. Fortunately, he got all the necessary documentation to fly, but his adventure had only just begun.

Ferreira’s trip from the United States to Japan was disrupted by a typhoon that forced the Brazilian to suffer an 18-hour delay on his flight. This meant that when the surfer reached his destination, his World Cup qualifying round had already started. From the airport to the beach where the competition was held there were 10 minutes by car and Italo’s participation was much more than complicated.

When Ferreira arrived at the event, there were only nine minutes left on his sleeve and he had to score in at least two waves, as he was 12 points behind the leader. The added problem? He had run out of the airport, without his luggage or surfboards. His compatriot Filipe Toledo lent him one of his boards and the Brazilian decided to get into the water with the short jeans with which he had made the whole trip.

That day, despite all the inconveniences, he became champion and achieved his passport to the Olympic event.