Italy and Turkey inaugurate a dream Eurocup in Rome: time, TV and formations 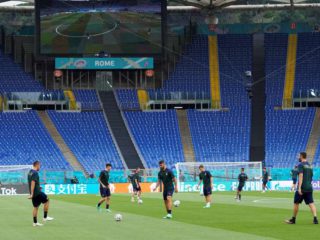 The selections of Italy and Turkey They will play this Friday the opening match of Euro 2020, rescheduled for 2021 due to the pandemic. They will do it from 4:00 p.m. (Argentine time) at the Olympic Stadium in Rome and the meeting will have live televising from DIRECTV Sports (610-619) and TNT Sports.

Three and a half years after living the saddest sports day in their history, With the qualification failed for the 2018 World Cup in Russia, Italy this Friday kicks off the Euro Cup with a highly demanding duel against Turkey, a team that knows how to give its best version in the big events.

The stage of the Roman Olympic, with 16,000 spectators in the stands and the tenor Andrea Bocelli as the protagonist of the opening ceremony, It houses the beginning of a European Championship that for Italy must represent a redemption and the icing on the cake to the rebirth launched by coach Roberto Mancini.

The elimination suffered in November 2017 against Sweden in the World Cup play-off represented a “year zero” for Italy, that since then, after the arrival of Mancini, started again until chaining a streak of 27 games without knowing the defeat that they returned to the elite of European football.

There are no longer any survivors of the 2006 world champion team, of what Gianluigi Buffon was the last to say goodbye, but Mancini put together a competitive team, which has elements of high international travel such as Leonardo Bonucci, Giorgio Chiellini or Marco Verratti, and young people called to definitively affirm themselves among the greatest.

This is the case of goalkeeper Gianluigi Donnarumma, Nicoló Barella, Federico Chiesa or Manuel Locatelli, who will have the challenge of replacing the injured Verratti this Friday in the Italian debut against Turkey.

Mancini collected the ashes of a group sunk and lacking in ideas and took advantage of that void to change the philosophy of the “azzurra” game. From defense and counterattack, he moved to an offensive attitude, based on possession and speed.

With these ideas, Italy qualified for the Eurocup with the full number of victories, ten out of ten, an achievement equaled only by Belgium, in addition to getting into the final phase of the League of Nations of the UEFA.

After this sweet moment, it is time to demonstrate this growth in a great official event, against a Turkey that is experiencing a new boom after the great results achieved by the group in 2008, semifinalist in the European Championship in Austria and Switzerland finally won by Spain.

The selector Senol Gunes It has a team that mixes excellent technique, such as that of Hakan Calhanoglu and Yusuf Yazici, and experience and character, such as that of Burak Yilmaz, the new French champion gunner with Lille.

The Turks arrive in Rome after being undefeated, in the qualifying phase, of the double confrontation against France. They did it with four points in two games and with a team that knows how to defend itself with a lot of order, before doing damage in the offensive zone.

The defender Merih Demiral He knows Italy very well, playing for Juventus, and his teammate Caglar Soyuncu from Leicester is used to meeting Europe’s best strikers in the Premier League.

For Italy, waiting for you Ciro Immobile, Lazio striker, get to be decisive in the big international events, the goal must come from the choral game, with elements such as Lorenzo Insigne and Domenico Berardi that will be key, along with the technique of Jorge Frello Jorginho and Barella in the medullary, to open spaces in the Turkish defense.

Big appointment in sight to open the Eurocup, in a group A in which they are also Switzerland and Wales, organized teams, committed and determined to fight.