“It’s disrespectful”: China refused to cooperate with the WHO in a new investigation into the origin of the coronavirus 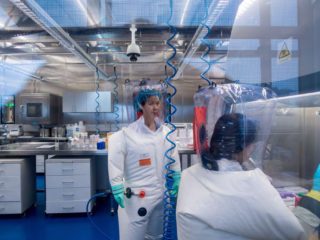 China on Thursday rejected the World Health Organization (WHO) proposal to audit Chinese laboratories as part of a broader investigation into the origin of the coronavirus pandemic saying he was “arrogant”.

This proposal is “a lack of respect for common sense and arrogant towards science“Chinese Vice Minister of Health Zeng Yixin told reporters, saying he was” extremely surprised. “

Last week the director general of the WHO, Tedros Adhanom Ghebreyesus, proposed to carry out “controls of the laboratories or research establishments active in the region where the first cases were identified in December 2019”, a reference to the Chinese city of Wuhan, epicenter of the pandemic that is shaking the world.

On December 31, 2019, China disclosed to WHO the existence of an outbreak of pneumonia cases in Wuhan. The theory of a leak from a Chinese laboratory was pushed by the US administration of Donald Trump, but dismissed by experts for a long time. However, in recent weeks it has been taken into account in the United States again.

// “I am who I wanted to be from my childhood”: the story of Gerónimo Carolina, the first person to receive a non-binary DNI

China vigorously fights the theory that COVID-19 may have originated in one of its laboratories, notably the Wuhan Institute of Virology, and spread due to a leak. On the other hand, Chinese authorities and media regularly point to the Fort Detrick laboratory in the United States as the source of the coronavirus. Located near Washington, this lab is at the heart of American bioterrorism research.

According to him Global Times, a Chinese newspaper with a distinctly nationalist tone, five million Internet users in that country signed a petition to open an investigation into Fort Detrick. For his part, one of the heads of the Wuhan Institute of Virology, Yuan Zhiming, said on Thursday that there was no “no pathogen escape” or “accidental infection of personnel” since the opening of this center in 2018.

Chinese Vice Minister of Health Zeng Yixin responded to what he called “rumors” by insisting that the laboratory “never carried out gain-of-function research on coronavirus, nor on a supposed artificially created virus.” His statements are related to the type of scientific investigation that is identified as the origin of a possible leak.

Under increasing pressure to investigate the origin of the coronavirus, the WHO was only able to send a mission of international experts to Wuhan in January, more than a year after the virus appeared. Recently, the United Nations health agency accused China of not having provided sufficient raw data during this first part of the investigation. Its CEO asked Beijing to “be transparent, open and cooperative” in the second phase, which includes auditing Chinese laboratories.

// Tour through the heart of Wuhan, the Chinese city where the coronavirus pandemic began

In addition, Tedros Adhanom Ghebreyesus called for more studies on animal markets in and around Wuhan. The response of the Chinese authorities comes a few days before the visit that Wendy Sherman, United States Undersecretary of State, makes to the country this weekend, with the aim of recovering the deteriorated relations between the two countries. This is the highest-level diplomatic visit of the administration of President Joe Biden, at a time of maximum tension with China due to the criticism over the origin of the pandemic, human rights and cybersecurity.

“I have nothing to fear”: the scientist spoke that could be key to knowing if the coronavirus escaped from a laboratory in China

For a growing number of politicians and scientists in the United States, the Chinese scientist Shi Zhengli -known as “Bat Woman” for the more than 15,000 virus samples that you have collected about bat– could be the key so that the world can know if the virus that unleashed the pandemic coronavirus escaped from a Chinese laboratory. “I’m sure I didn’t do anything wrong. I have nothing to fear”, He said in an interview with The New York Times.

According to a recent article in the prestigious American newspaper, some scientists they point out that the doctor Shi performed dangerous experiments with bat coronavirus in labs that weren’t safe enough.

The idea that the coronavirus may have escaped from the Wuhan Institute of Virology was much discussed among the scientific community and rejected by many who reduced the hypothesis to a conspiracy theory of former President Donald Trump. However, it recently gained ground after the intelligence reports According to which three researchers from the Institute fell ill in 2019, after visiting a bat cave in Yunnan province.

According to the New York Times, in 2017 Shi and his lab colleagues published research on an experiment in which they had created “New bat hybrid coronaviruses, mixing and uniting parts of the existing ones, including at least one that was almost transmissible to humans, in order to study its ability to infect and replicate in human cells ”.

Shi – one of 109 scientists chosen by the United States Academy of Microbiology for his contributions to that field of science in 2019 – told the American newspaper that his experiments they didn’t want a virus to be more dangerousRather, they aimed to understand how the virus could pass from one species to another. “My laboratory never conducted or collaborated with experiments that improve the virulence of the virus,” he said.

“How can I give proof of something that there is no proof of?“Said the Chinese scientist, in a series of responses via e-mail to the New York Times. “I do not understand how the world has come to this, to cover all the time with trash to an innocent scientist,” he wrote in a text message.