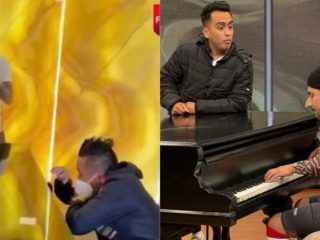 Gianluca Lapadula and Christian Cueva starred in a video of the Peruvian Football Federation (FPF), where the athletes were appreciated “playing” the piano after their triumph against the Ecuadorian team.

The clip quickly became viral on social networks and received positive acceptance from netizens for the humor of Lapadula and Cueva.

Jorge Benavides and his production were not strangers to this video and he announced on Instagram that he has been preparing a parody of said clip for his Saturday program on ATV.

“Does this image remind you of anything? We are waiting for you this Saturday at ‘JB en ATV’. Do not miss it!”, the Peruvian comedian wrote on his social network.

On the other hand, Jorge Benavides is no stranger to the political situation in Peru, which is why he is preparing his own version of the public hearing that the National Elections Jury (JNE) presented on the case of contested minutes and votes.

“You choose. Who should play each character and what kinds of errors can there be in the cédulas? I read them “wrote the popular comedian.