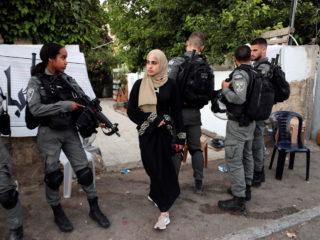 “They will not move us”. After more than six decades living in Sheikh Yarrah, the Palestinian Nabil al Kurd sits in a chair on the street, as if he were in his own house, in front of a building that sports a neon Star of David on the facade. “Now everyone knows what happens in Jerusalem,” says this retired warehouse manager, born 77 years ago in Nazareth, from where his family had to flee in 1948 after the birth of the State of Israel. Police have surrounded the neighborhood for a month, when the Israeli Supreme Court suspended the announcement of its final decision on the expulsion of several Palestinian families from the district because of a lawsuit by Jewish settlers claiming ownership of their homes.

Turned into a kind of isolated ghetto, accessible only to its residents, Sheikh Yarrah is surrounded by security forces checkpoints. The agents showed up at Al Kurd’s house on Sunday to take his two twin sons into custody: the digital activist Muna and the 23-year-old poet Mohamed. Both have become the main spokespersons for a peaceful uprising that has brought through social networks the message of the neighbors of Sheikh Yarrah, who have been suing for more than 15 years to challenge his eviction. Twitter or Instagram have transformed their mobilization into an intelligible symbol on a global scale – that of those who fight to stay in their own home – for the Palestinian cause. Muna was taken in handcuffs from her home. Mohamed, who was not at home, later appeared at the police station, where he was charged with “disturbing public order with tumultuous acts”. The two were released after several hours of questioning.

“They are pressuring us to leave, but we will always remain here. My married children, however, cannot come to see me because of the controls ”. Together with the patriarch of the Al Kurd, Mohamed Sabbagh, 72, a former employee of a hospital on the Mount of Olives, he also protects himself from the sun while both await the arrival of the Turkish consul in Jerusalem, with whom they are going to meet. The police deployment around the neighborhood tries to prevent the presence of Palestinian protesters and Israeli pacifists, but allows the passage of diplomats and journalists.

The day before the arrest of the Al Kurd twins, the border police, a militarized body, had arrested the journalist Givara Budeiri, correspondent Al Jazeera In Israel. Accredited to the Government Press Office and identified with a vest with the inscription “Press” in English, she was pushed into a patrol car while covering a demonstration in Sheikh Yarrah.

The agents accused her of assaulting the authorities, although in videos recorded in the area, only a struggle is observed when she insisted on displaying her official accreditation. When he left the police station he went to a hospital with a broken arm. The Foreign Press Association in Jerusalem he has demanded sanctions for the police officers responsible for the arrest. “Without provocation, she was beaten and her equipment was broken,” reads her statement.

“We do not expect any change if there is a new government in Israel and (Benjamin) Netanyahu leaves. Just more of the same ”, agree the neighboring veterans, whose life has passed under the tree-lined valley of the district, between 74 buildings and some 550 Palestinian inhabitants, to the north of the historic walled enclosure. “I want to stay here until the end of my days, and that my descendants can continue in the house,” expresses the desire of all present Sabbagh, who shares the same block of houses with an Israeli family. The permanent checkpoint where residents receive visitors is located in front of an awning where, from time to time, settlers stand guard on the opposite sidewalk. They are just under a hundred Israelis, distributed in 13 buildings.

Sheikh Yarrah’s dispute seemed hibernating since May 9, when the Israeli Supreme Court canceled at the last moment the announcement of the sentence on the eviction of four other families, a ruling that was to set a precedent for the rest of the 28 affected by the demand of a radical Israeli nationalist group. The association, which promotes the settlement of Israeli settlers in Jerusalem, had acquired the property rights from a religious foundation that bought the land more than a century ago, under Ottoman administration, to install a shrine next to the tomb of Simon the Righteous, a Jewish high priest of old. The violent riots in the Old City of Jerusalem that preceded the High Court’s decision and the escalating war in the Gaza Strip that followed marked that date as a milestone in recent Palestinian history.

Mohamed Sabbagh arrived with his family in Sheikh Yarrah when he was just eight years old and he cannot conceive of another urban horizon. He believed that 64 years later it would be impossible to stop the machinery of Israeli justice. “Now we have managed to get our message across to America, to Europe, almost everywhere, and we are not alone ”, he muses aloud together with Nabil al Kurd. “But it has not been the work of leaders, but of everyone. Yes, we have had spokespersons who have known how to communicate to the world the change that Jerusalem is undergoing ”, he acknowledges.

A month after the Supreme Court stopped the clock on the eviction process, Israel’s attorney general, Avichai Mandelblit, has washed his hands and declined to intervene to request a review of the judicial file. The Prosecution considers the case as yet another real estate dispute between individuals, between proprietors with recognized title and irregular occupants, with little chance of leading to a favorable ruling for the residents of Sheikh Yarrah.

The countdown for the Supreme Court to issue a final judgment has already begun. “The attorney general tries to get rid of any responsibility,” says the Israeli organization Peace Now. “But the case cannot be treated as a private lawsuit between allegedly equal parties,” warns this NGO against the occupation, “without considering the laws that discriminate against one of them.” The next sessions of the High Court conclude on July 20, with the end of the judicial year.

The religious foundation that managed the Shrine of Simon the Righteous left the eastern part of the city after the partition of Jerusalem in 1948: the western part, Jewish and controlled by Israel, and the eastern part, Arab and under Jordanian administration. Many Palestinian refugees, who had lost their homes and land in the new State of Israel, were relocated to vacant properties like those of Sheikh Yarrah. In 1967, after the Israeli conquest of East Jerusalem, the original owners wielded their rights before selling them to an organization that promoted the presence of settlers, with the declared objective of reinforcing the Jewish character of the Holy City. About 3,000 Palestinians living in about two hundred buildings in East Jerusalem are pending eviction, he recalls Peace Now.

The rights of Jewish owners to recover their property do not expire. Those of the Palestinians in the current Israeli territory lost their validity three years after their departure and passed into the hands of the State – in the so-called custody of absent property – which later gave them to Jewish families. “For decades, the courts have been based on a discriminatory legal system,” he noted Tuesday. Haaretz in an editorial. “But it is a system that is impossible to defend on the international scene,” the Israeli newspaper concluded, “and it cannot be accepted as something logical or moral by any sensible person.”

“We don’t know when the new hearing will be at the Supreme Court. In weeks, maybe days, ”says Sabbagh before heading with his neighbor to meet the Turkish consul. “But with two different laws, one for them and the other for us, we have to lose.” He knows that the world is closely watching this corner of Jerusalem in case there may be an ethnic cleansing of dozens of Palestinian families. A patrol of Israeli border agents in campaign uniforms passes him, assault rifles on their shoulders. “Meanwhile,” he says goodbye, “here we are still surrounded by the police.” “But they already know everywhere what our situation is“, Al Kurd had remarked shortly before,” and they have finally listened to us. “