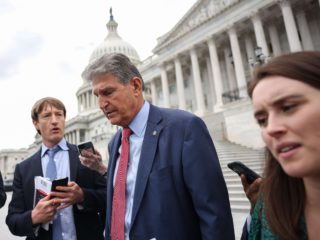 When in Washington, Democratic Senator Joe Manchin lives in the southeast of the city, on a boat anchored in the Anacostia River called Almost Heaven, the lyrical opening with which John Denver’s ode to West Virginia begins. “If you buy something that’s permanent, the voters in your state think you like the place, and I’m as sure as hell that I don’t like this city at all.”

His bench colleagues say that “Joe represents West Virginia, he does not represent the Democratic Party.” And it is that Manchin, 73, is a Democratic senator in a state that in 2020 Donald Trump won by almost 70 points of advantage versus his rival, Joe Biden, placing West Virginia as the fourth most Republican state in the nation in the presidential vote.

With the Senate split in half (50 seats for each formation) after the 2020 elections, Democratic leaders are trying to pass all possible legislation now that they have the numbers in their favor, since in the event of a tie, the deciding vote corresponds to the vice president, Kamala Harris. And yet, before every law that the Democratic Party tries to pass, it runs into a stumbling block: Joe Manchin imposes his will.

With a political career behind him that was forged in the West Virginia Capitol, Manchin made the leap to the national Senate in 2010 – in a special election following the death of Robert Byrd, who served in the US upper house for more than 50 years. years-. Since then, this former carpet dealer and coal broker has been at the center of all the weighty political debates in Washington. Now, the most Republican Democrat in the United States tries, in a scenario of strong polarization in the country, to mediate between a party eager to use its majorities to advance its legislative projects and the opposition, with the aim of forcing pacts and restoring an agenda bipartisan.

Statistics don’t lie: Manchin consistently votes with Republicans on bills and works more with them than with his fellow Democrats, according to numbers collected by the political analysis site. FiveThirtyEight. Manchin is aware of the power that his vote has and also assumes that, perhaps, he will not renew his seat in the mid-term elections in 2022, so he wants to use this opportunity, “his moment in time”, as he defines it, to push the Senate toward inter-party pacts in its own way.

It is said in the capital that the senator from West Virginia is a kind of unexpected asset for Republicans in the current Congress. He is in favor of coal as a source of energy, against abortion and is in favor of firearms. His convictions are the product of an era in which regionalism, the defense of the state it represents, was as significant as party affiliation and senators were more individual actors than predictable votes for their group.

His tax policies when he was a legislator in his state earned him an “A” grade from the liberal Cato Institute — he is the only Democrat to hold that qualification. Manchin was a fierce critic of Barack Obama’s Environmental Protection Agency for its environmental standards, and came closer to the interests of his state’s influential extractive coal industries.

Manchin’s resistance to eliminating filibustering – a parliamentary objection tactic that has led to the need for 60 votes to pass some laws in the Senate – has drawn the ire of many House Democrats, particularly some who consider that the senator is more inclined to pressure his fellow ranks to compromise with the Republicans than to ensure the right to vote for the black population with the approval of what is known as the Law for the People. At least 14 states have enacted new laws this year that restrict or make it difficult to vote. Republicans continue to lobby to enact these similar laws in the States.

The senator wrote an opinion article, published last Sunday by the newspaper Charleston Gazette-Mail, explaining why he plans to vote against the Law for the People and continues to oppose ending the requirement for a 60-vote majority to enact certain laws. “Some Democrats have again proposed removing the obstructionist rule [en referencia al filibusterismo] of the Senate to pass the Law For the People with only Democratic support, ”he continued. “They have tried to demonize obstructionism and conveniently ignore how in the past it has been a fundamental mechanism to protect the rights of Democrats,” he concluded.

Manchin is a Kennedy Democrat because he is a Catholic. Because his world was that of coal and unions. And because growing up in the 1950s and 1960s, almost everyone in West Virginia was a Democrat, and especially in Farmington, their birthplace. “So, only the rich were Republicans,” he said. The senator is a Democrat because of his grandfather, who in 1904 landed in New York as a child named Giuseppe Mancini and worked in the coal mines. The senator assures that the people of Farmington were Democrats “because Roosevelt saved them from the Great Depression with the New Deal”, but that he is “his own brand”. “People know it and they don’t look to me for a D (Democrats) or an R (Republicans).” “My secret recipe is this: I am myself.”