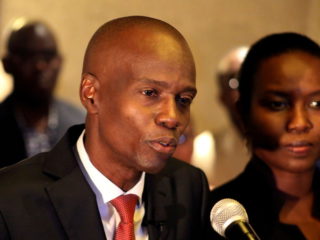 “President Jovenel had a vision and we Haitians are not going to let that die,” he said in a interview with The New York Times, published this Friday.

Before launching into the presidential race, I point out, you will need to have more surgery on your right arm, in which she was injured during the murder of her husband, which occurred on July 7, when mercenaries entered her private residence in Port-au-Prince.

So far, Martine Moïse has undergone two operations and, according to her, the doctors plan to implant nerves from the feet in her arm; Despite this, he said, he may not be able to fully use that upper limb again.

Some details of the assassination

In the interview, the former first lady recounted part of what she experienced on the day of the assassination. She said that she and her husband were sleeping when the first shots were heard, which woke them up and made them get up.

She went to wake up her children, over 20 years old, and told them to hide in a bathroom. Her husband called two senior officers in charge of her security, but the mercenaries had already entered the house, allegedly without any impediment.

The then president told his wife to get down on the floor: “There I think you will be safe”the widow recalled, pointing out that they were the last words her husband said to her.

A barrage of shots entered the room and she was hit in the hand and elbow. After that she stayed still on the floor. “I felt like I was choking, because I had blood in my mouth and I couldn’t breathe,” he recalled, adding that he heard the mercenaries talking, although none of them spoke Creole or French, and searching the room for something.

Then the killers left. “When they left, they thought she was dead”.

So far, 26 people have been arrested for their alleged connection to the assassination, including 18 Colombians, most of them retired from the Army of that country.

Martine Moïse recognizes the work that has been done to capture these men, but she is still haunted by doubts about who the mastermind is, the one who gave the orders and contributed the money for the assassination. “Only the oligarchs and the system could kill him,” he said.