Juan Antonio Pizzi, after the elimination of Racing: “I do not contemplate taking a step to the side” 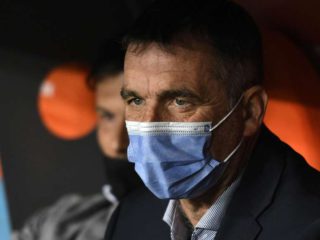 Racing’s technical director, Juan Antonio Pizzi, denied the “possibility of taking a step to the side” in his position after the 3-1 defeat last night against San Pablo, a result that left the “Academy” out of the Copa Libertadores in the round of 16.

“I do not contemplate the possibility of taking a step to the side. I feel the support of the people and the Racing leadership”, Declared Pizzi in a press conference.

“The squad we have is the one that will face the semester, but regardless of the returns we may have had today, you have to compose yourself and think about Saturday’s game and the championship”He continued.

“We are sad because we were very excited. In the three games we faced the rival, most of us achieved what we wanted, but today we suffered 10 minutes of deconcentration that were fatal and it prevented us from being motivated ”, he continued in his analysis.

“If there is something to highlight about the rival, it was the efficiency and from there, everything was self-love. In fact we discount, but it is very difficult in half an hour to get three goals ahead ”, he highlighted about the performance of the team led by the Argentine DT Hernan Crespo.

“We have to correct the level of concentration at specific times of the game and knowing how to play it as in others. You have to add that kind of thing if we want to be at the top in the tournament, “concluded Pizzi.

Racing Club will host Gimnasia y Esgrima La Plata next Saturday at the Juan Domingo Perón stadium, in a match valid for the second date of the Professional Football League.

Racing added a new international disappointment, falling 3-1 at home in Avellaneda against São Paulo of Brazil, which eliminated them from the knockout stages of the Copa Libertadores, their highest goal of the semester.

The 1-1 registered in the first leg gave a small advantage to the Academy, which in the Cilindro de Avellaneda made an intelligent first half playing away from the goal defended by Gabriel Arias.

// The image that shows how they hurt Boca in Brazil

However, at 44 minutes, the former Independiente Emiliano Rigoni captured a rebound off the post after a shot by Marquinhos Alencar and defined the empty goal, while all Racing remained protesting an alleged foul on Lolo Miranda not sanctioned by the Uruguayan referee Gustavo Tejera, nor by the VAR.

In addition, first the speedy Marquinhos was the one who took advantage of a mistake by Leonardo Sigali and then again Rigoni pushed the ball to stretch the advantage, with more than 30 minutes of play still remaining.

Those led by Juan Antonio Pizzi reacted to a medium-distance shot from Javier Correa, but it was not enough for them to continue in the tournament that always generates the most enthusiasm in academic fans.

The truth is that this result benefited those led by Argentine Hernán Crespo, who expect to rival the winner of the Catholic University of Chile and Palmeiras (0-1).